The Fluid Dynamics of “The Starry Night”: How Vincent Van Gogh’s Masterpiece Explains the Scientific Mysteries of Movement and Light


The Fluid Dynamics of “The Starry Night”: How Vincent Van Gogh’s Masterpiece Explains the Scientific Mysteries of Movement and Light

“In a period of intense suffering, Van Gogh was somehow able to perceive and represent one of the most supremely difficult concepts nature has ever brought before mankind.” 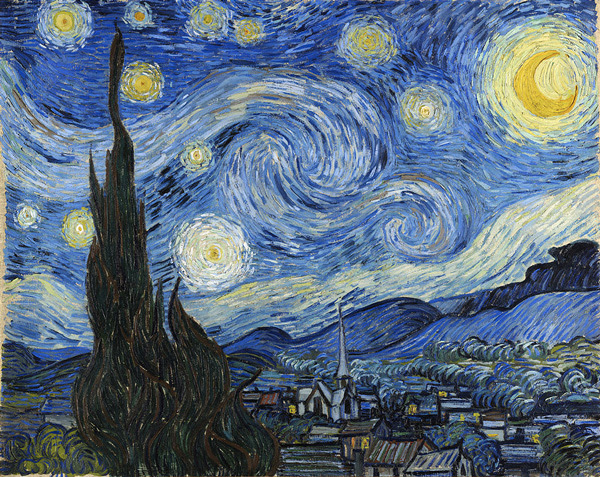 In 1889, inspired by a famous astronomical drawing that had been circulating in Europe for four decades,Vincent van Gogh painted his iconic masterpiece “The Starry Night,” one of the most recognized and reproduced images in the history of art. At the peak of his lifelong struggle with mental illness, he created the legendary painting while staying at the mental asylum into which he had voluntarily checked himself after mutilating his own ear.
But more than a masterwork of art, Van Gogh’s painting turns out to hold astounding clues to understanding some of the most mysterious workings of science.
This fascinating short animation from TED-Ed and Natalya St. Clair, author ofThe Art of Mental Calculation, explores how “The Starry Night” sheds light on the concept of turbulent flow in fluid dynamics, one of the most complex ideas to explain mathematically and among the hardest for the human mind to grasp. From why the brain’s perception of light and motion makes us see Impressionist works as flickering, to how a Russian mathematician’s theory explains Jupiter’s bright red spot, to what the Hubble Space Telescope has to do with Van Gogh’s psychotic episodes, this mind-bending tour de force ties art, science, and mental health together through the astonishing interplay between physical and psychic turbulence.

Van Gogh and other Impressionists represented light in a different way than their predecessors, seeming to capture its motion, for instance, across sun-dappled waters, or here in star light that twinkles and melts through milky waves of blue night sky.
The effect is caused my luminance, the intensity of the light in the colors on the canvas. The more primitive part of our visual cortex — which sees light contrast and motion, but not color — will blend two differently colored areas together if they have the same luminance. But our brains primate subdivision will see the contrasting colors without blending. With these two interpretations happening at once, the light in many Impressionist works seems to pulse, flicker and radiate oddly.
That’s how this and other Impressionist works use quickly executed prominent brushstrokes to capture something strikingly real about how light moves.
Sixty years later, Russian mathematician Andrey Kolmogorov furthered our mathematical understanding of turbulence when he proposed that energy in a turbulent fluid at length Rvaries in proportion to the five-thirds power of R. Experimental measurements show Kolmogorov was remarkably close to the way turbulent flow works, although a complete description of turbulence remains one of the unsolved problems in physics.
A turbulent flow is self-similar if there is an energy cascade — in other words, big eddies transfer their energy to smaller eddies, which do likewise at other scales. Examples of this include Jupiter’s great red spot, cloud formations and interstellar dust particles.
In 2004, using the Hubble Space Telescope, scientists saw the eddies of a distant cloud of dust and gas around a star, and it reminded them of Van Gogh’s “Starry Night.” This motivated scientists from Mexico, Spain, and England to study the luminance in Van Gogh’s paintings in detail. They discovered that there is a distinct pattern of turbulent fluid structures close to Kolmogorov’s equation hidden in many of Van Gogh’s paintings.
The researchers digitized the paintings, and measured how brightness varies between any two pixels. From the curves measured for pixel separations, they concluded that paintings from Van Gogh’s period of psychotic agitation behave remarkably similar to fluid turbulence. His self-portrait with a pipe, from a calmer period in Van Gogh’s life, showed no sign of this correspondence. And neither did other artists’ work that seemed equally turbulent at first glance, like Munch’s ‘The Scream.”
While it’s too easy to say Van Gogh’s turbulent genius enabled him to depict turbulence, it’s also far too difficult to accurately express the rousing beauty of the fact that in a period of intense suffering, Van Gogh was somehow able to perceive and represent one of the most supremely difficult concepts nature has ever brought before mankind, and to unite his unique mind’s eye with the deepest mysteries of movement, fluid and light.

Complement with Van Gogh on art and the power of love and a peek inside hisnever-before-revealed sketchbooks.
By mimi sato - December 05, 2014