Human Worlds of the Anthropocene


Human Worlds of the Anthropocene

The effects of humans on the global environment are perceived to be so significant by some scientists that they argue humans have become a major driving force in environmental change on a par with the forces of nature. It is this rapid impact that has led some geologists to unofficially name (but not, as yet, officially recognise) this very recent period of the earth’s history as the Anthropocene.Putting criticism and disputes over the geologic validity of this idea aside, the effects of human population and economic development as part of the processes of globalisation influence the natural environment as much as the natural environment previously determined the existence of human life across the globe. One part of our footprint are the major communication and transport infrastructure links that shape the human planet. 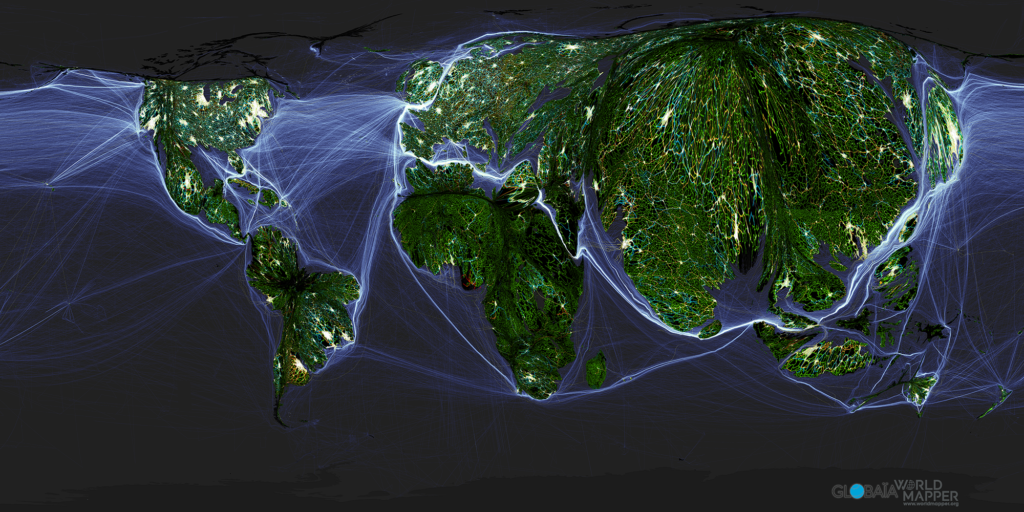 The information of an interconnected world redrawn in this map was assembled by Globaïa, an organisation which raises awareness concerning the global changes that characterise the Anthropocene. The individual layers that emerge in the image show build up areas and the light pollution of cities (white/yellow over land), roads (green), railway lines (orange) shipping routes (white/blue over sea), pipelines (red), transmission lines (blue) and submarine cables (yellow over sea).In this gridded population cartogram the most populated areas get most space (reducing the depopulated areas), re-projecting the layers of human action and interaction accordingly. The cartogram puts a special focus on the dense network of links within the areas where people live.Rather than being a mere image of densely built up areas with a clutter of infrastructure, this map highlights some significant differences: The distribution of lights from the brightest cities where all the global connections merge dominates the wealthier parts of the world. In addition, areas such as the east of the United States show a complex cobweb of all other elements displayed in the map. The African continent is characterised by having far fewer communication lines and even far less railways than many other parts of the world. Similar characteristics emerge in the shipping routes, giving an indication of the unequal connections of global trade routes and the imbalance of the underlying patterns that have such a high impact on the planet’s resources.The human impact affects the entire planet, but for a large part of the world’s population the planet is far less a global village than a one way street that channels their resources such as oil or gas to the spaces that are the real worlds of the Anthropocene.
This can also be viewed in the maps section where you find further details about the cartogram, the data and their sources, and further copyright information:
This is a modified and updated version of a feature published in the May 2015 edition of Geographical Magazine. Please contact us for further details on the terms of use.