By Michael Gakuran | 5th Nov, 2013 | Japan | 24 Comments |
One of the lesser-known but fascinating parts of Japanese culture is that of the Ama pearl divers. Ama (海女 in Japanese), literally means ‘woman of the sea’ and is recorded as early as 750 in the oldest Japanese anthology of poetry, the Man’yoshu. These women specialised in freediving some 30 feet down into cold water wearing nothing more than a loincloth. Utilising special techniques to hold their breath for up to 2 minutes at a time, they would work for up to 4 hours a day in order to gather abalone, seaweed and other shellfish. 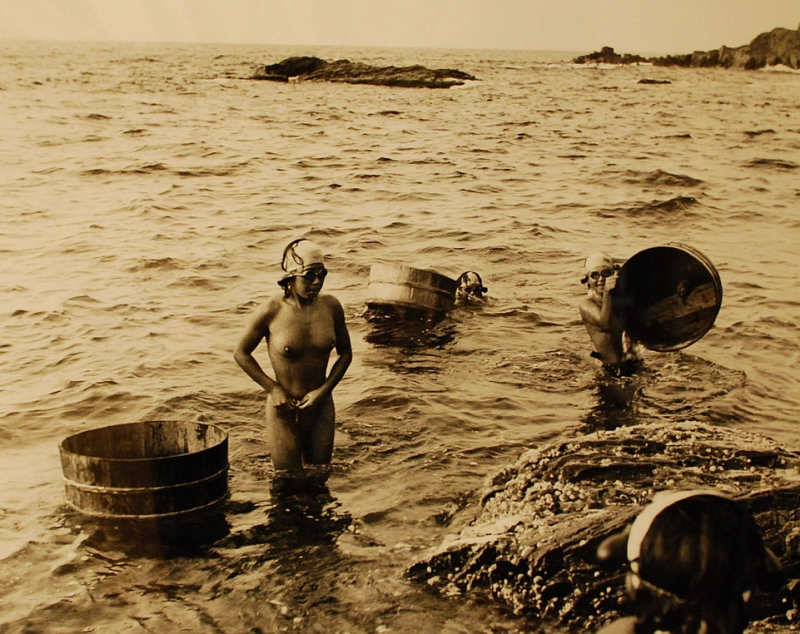 (Fosco Maraini)
The most profitable pursuit however was diving for pearls. Traditionally for Ama, finding a pearl inside an oyster was akin to receiving a large bonus while they went about their ancestral practice of collecting shellfish. That changed when Kokichi Mikomoto, founder of Mikimoto Pearl, began his enterprise. 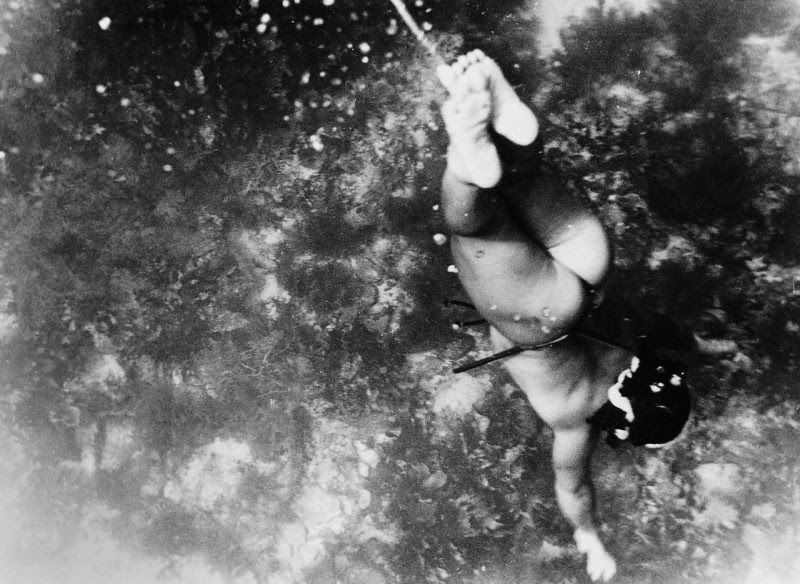 (Fosco Maraini)
Mikimoto used Ama divers to look after his cultivated pearls on Mikimoto Pearl Island, near Toba city. This business was the main reason for the strong association between Ama and pearl diving among foreign observers that continues to this day. Another little-known fact is that the ‘traditional’ white attire we often see Ama divers wearing was also created by Mikimoto. He observed how surprised the foreign tourists visiting his pearl island were when seeing the Ama diving naked wearing only their traditional loincloth. (Source) 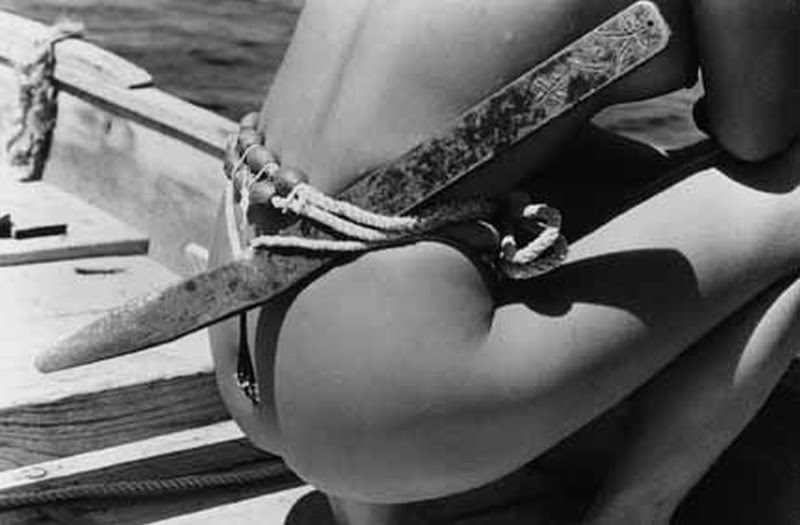 The role of the Mikimoto ama was to collect the oysters from the seabed so that the pearl-producing nucleus may be inserted. Once this critical process was completed, the ama then carefully returned the oysters to the seabed – in a place where they were protected from external dangers (such as typhoons and red tide).
In order to successfully complete this process, each diver would have to hold her breath for up to two minutes at a time in often freezing cold waters. Upon surfacing, the ama opened their mouths slightly and exhaled slowly, making a whistling sound known as ‘Isobue’.
While traditional ama divers wore only a fundoshi (loincloth) to make it easier to move in the water and a tenugui (bandanna) around their head to cover their hair, Mikimoto ama wore a full white diving costume and used a wooden barrel as a buoy. They were connected to this buoy by a rope and would use it to rest and catch their breath between dives. 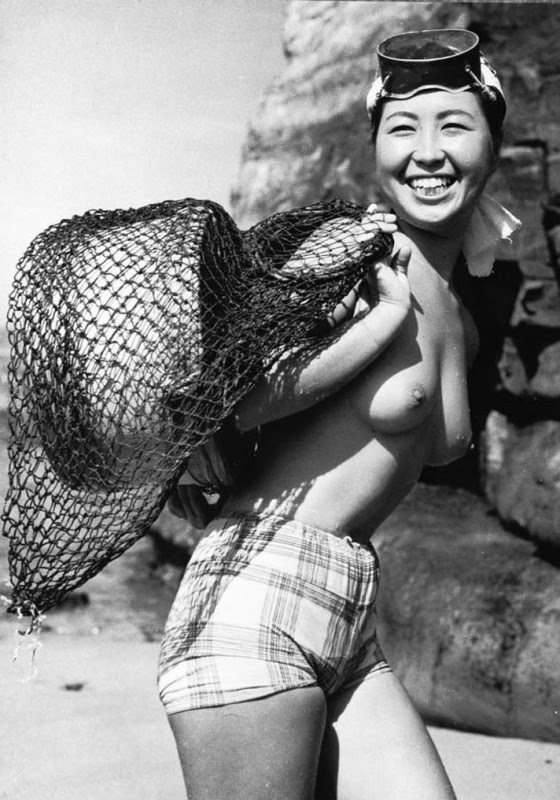 (Yoshiyuki Iwase)
Although the tradition is still maintained across many parts of Japan, the skinny-dipping practices of old have largely been lost. Since the Meiji era, divers wore goggles for clarity and from 1964, rubbery, black wetsuits were introduced. 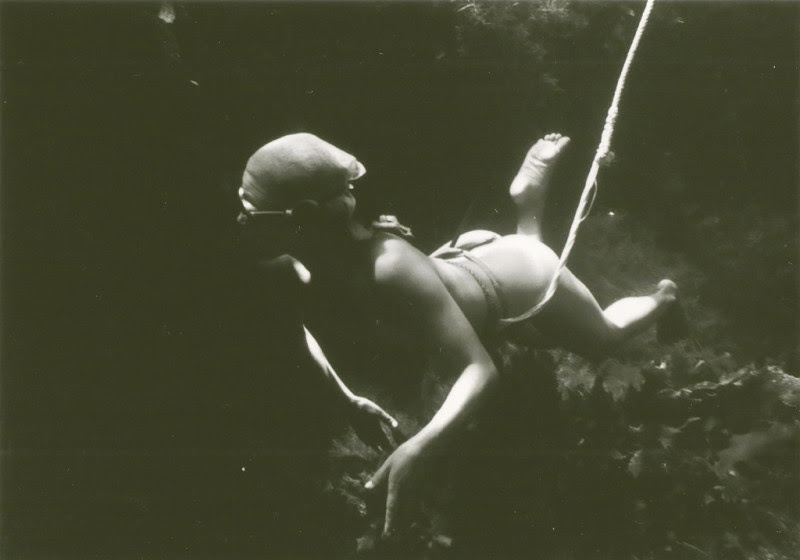 (Eishin Osaki)
One photographer in particular stands out with his photographs of the Ama. His name was Yoshiyuki Iwase (1904-2001). He was given a gift of a small Kodak camera when young and found his muse in the beautiful mermaids of the tired, coastal regions of Japan. Thanks to his efforts, we can take a step back in time and have a glimpse at what life was like working as an Ama diver, and also see his progression as a photographer moving into nude portraits. Since his website is now offline, I’m gathering up as many vintage pictures as I can for posterity that I’ll post as its own separate article soon. 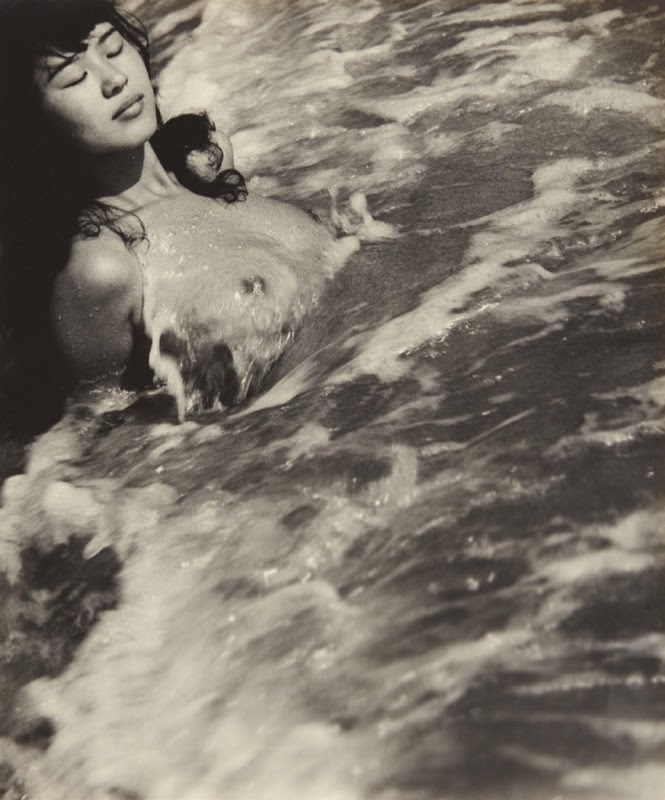 (Yoshiyuki Iwase)
One of the reasons Ama are largely female is said to be their thicker layer of fat than their male counterparts to help them endure the cold water during long periods of diving. Another reason is the self-supporting nature of the profession, allowing women to live independently and foster strong communities. Perhaps most surprisingly however, is the old age to which these women are able to keep diving. Most Ama are elderly women (some even surpassing 90 years of age) who have practiced the art for many, many years, spending much of their life at sea. 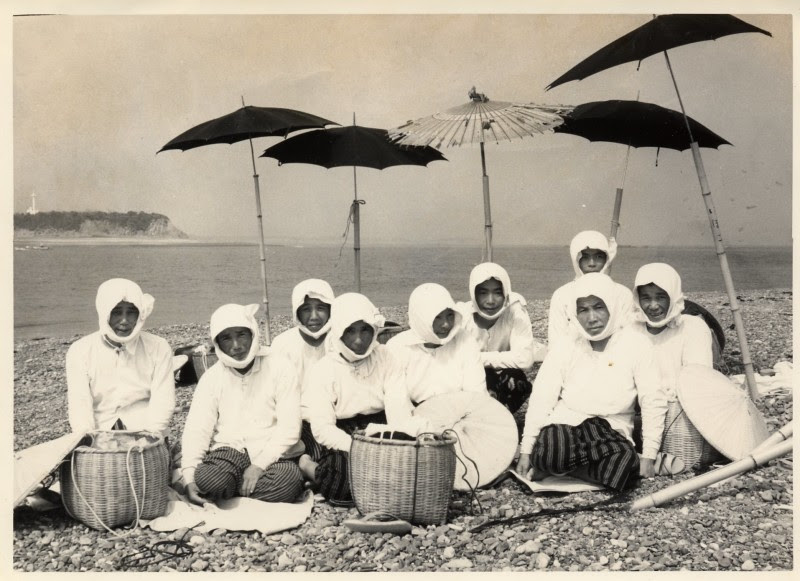 (Source)
With lack of young women to succeed their elders and modernisation of Japan’s fisheries however, this ancient practice is dwindling. Numbers have dropped to just 1/8th of what they once were. In 1956 there were 17,611 Ama in Japan but as of 2010 only 2,174 remained. Of those, 973 (nearly half) work in either Toba or Shima city, Mie prefecture. (FPCJ) 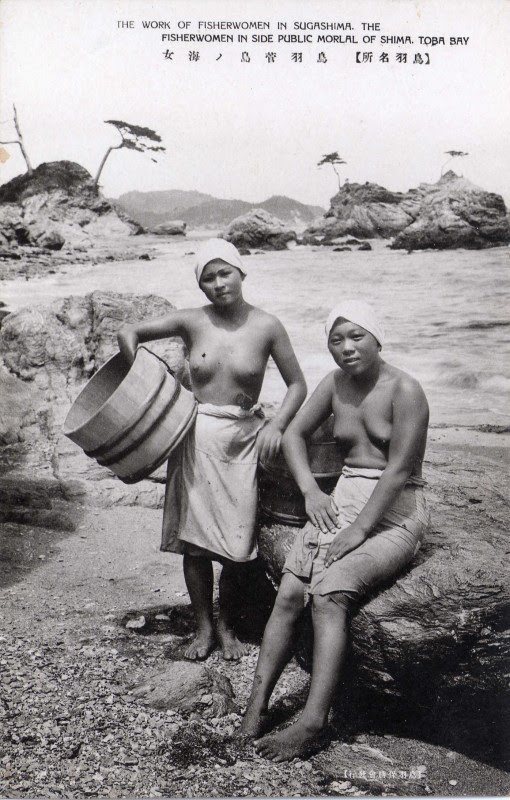 (Source)
As technology progressed, the Ama communities were faced with decisions – adopt new tools and equipment or retain traditions? One of the most important parts of the decision-making was consideration of sustainability. New fishing methods could easily enable greater hauls and reduce work, but at the same time, increase the risk of overfishing and damage the delicate ecosystems that supported life for these coastal towns. Rules were introduced to prevent this. 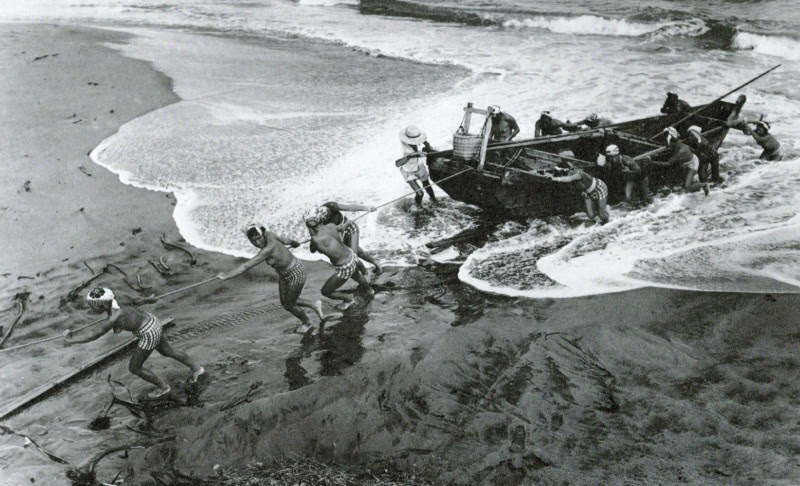 (Yoshiyuki Iwase)
On Hegura island in Wajima city, rules state that abalone under 10 centimetres must be returned to the sea, with a punishment of two days without work if caught breaking them. Despite their efforts however, numbers of abalone and other shellfish have been in decline, in part due to overfishing, but also the rising sea temperatures which affects the growth of seaweed the shellfish eat. (Source) 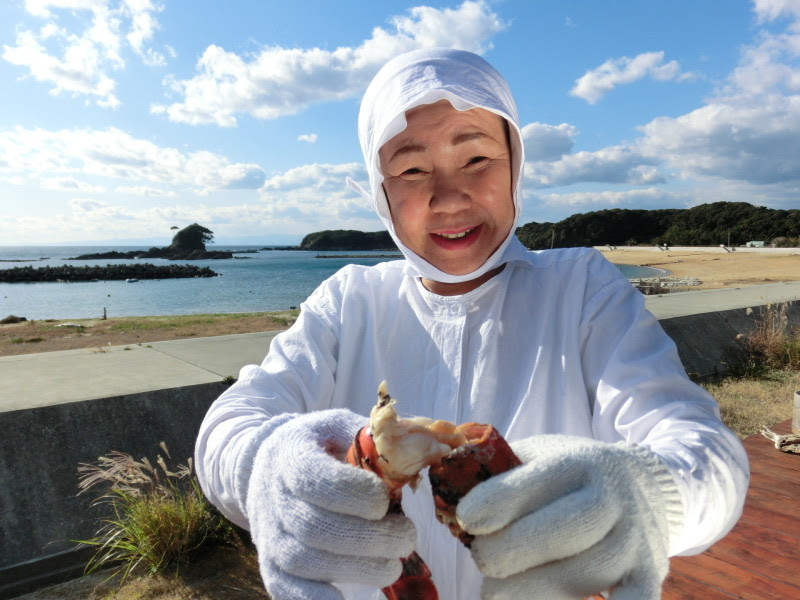 (Source)
This culture of national mermaids diving for the nation is not only unique to Japan however. From 2007 Korea has been presenting its best case to have the Haenyo diversof Jeju Island listed as a UNESCO Intangible Cultural Heritage. In similar fashion, Japan has now joined the races by recommending its own female divers, boosted by the popularity of a recent NHK drama ‘Amachan‘, starring a young girl who moves to the Tohoku region of Japan to became an Ama diver. (Asahi) 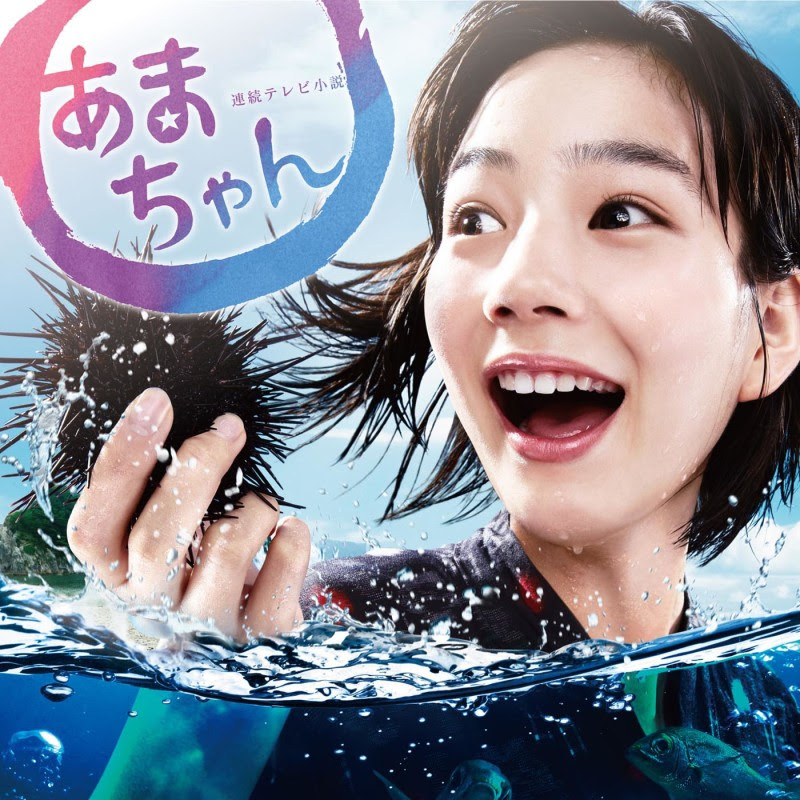 Although perhaps the scantily-clad, romanticised image of the profession is a thing of the past, there’s still a rich history and culture that needs to be conveyed to younger generations. The tourism industry at Mikimoto Pearl is a great start to help preserve the memory, but the age-old fishing traditions held by small coastal villages are definitely in need of special attention to make sure their heritage isn’t forgotten completely.
To wrap up, below are a few interesting related media that I stumbled upon. Enjoy!
Depictions of Ama are featured in old works of art, such as the piece below by master Kuniyoshi. (Source)

Predictably, there are also films made around the profession. Ama are featured in the famous work ‘Tampopo’, as well as the rather less famous, and slightly bizarre 1959 horror movie ‘Ama Ghost House’ (海女の化物屋敷). (Trailer below).
Finally, I’ll leave you with a couple of short videos talking about the Ama diving profession. The first is a superb documentary with an interview with a former Ama diver.
The second, although I have serious doubts about the validity of the narration, has rather nice, colourful video shots to enjoy. Just ignore the dialogue.
Lastly then, here’s the poem from the Man’yoshu that mentions Ama divers.
沖つ島 い行き渡りて 潜くちふ 鮑玉もが 包みて遣らむ （万葉集）
By mimi sato - August 17, 2014