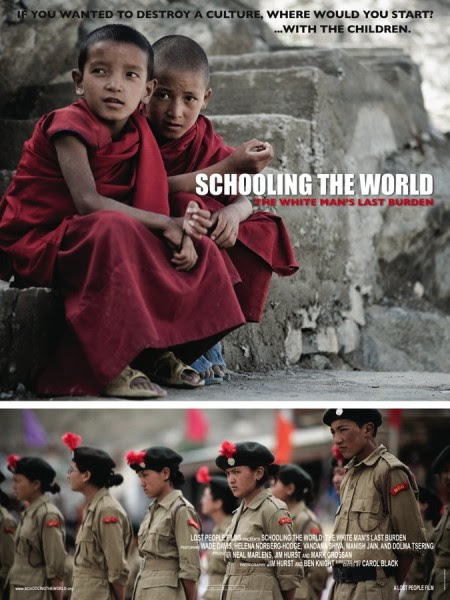 If you wanted to change an ancient culture in a generation, how would you do it?

You would change the way it educates its children.
The U.S. Government knew this in the 19th century when it forced Native American children into government boarding schools. Today, volunteers build schools in traditional societies around the world, convinced that school is the only way to a ‘better’ life for indigenous children.
But is this true?  What really happens when we replace a traditional culture’s canon of knowledge with our own?  Does life really get better for its people?
SCHOOLING THE WORLD takes a challenging, sometimes funny, ultimately deeply troubling look at the role played by modern education in the destruction of the world’s last sustainable indigenous cultures.
Beautifully shot on location in the Buddhist culture of Ladakh in the northern Indian Himalayas, the film weaves the voices of Ladakhi people through a conversation between four carefully chosen original thinkers; anthropologist and ethnobotanist Wade Davis,  a National Geographic Explorer-in-Residence; Helena Norberg-Hodge and Vandana Shiva, both recipients of the Right Livelihood Award for their work with traditional peoples in India; and Manish Jain, a former architect of education programs with UNESCO,  USAID, and the World Bank.
It  examines the hidden assumption of cultural superiority behind education aid projects, which overtly aim to help children “escape” to a “better life.”
It looks at the failure of institutional education to deliver on its promise of a way out of poverty – here in the United States as well as in the so-called “developing” world.
And it questions our very definitions of wealth and poverty – and of knowledge and ignorance – as it uncovers the role of schools in the destruction of traditional sustainable agricultural and ecological knowledge, in the breakup of extended families and communities, and in the devaluation of ancient spiritual traditions.
Finally, SCHOOLING THE WORLD calls for a “deeper dialogue” between cultures, suggesting that we have at least as much to learn as we have to teach, and that these ancient sustainable societies may harbor knowledge which is vital for our own survival in the coming millenia.