A Guide for the Perplexed: Mapping the Meaning of Life and the Four Levels of Being

A Guide for the Perplexed: Mapping the Meaning of Life and the Four Levels of Being

How to harness the uniquely human power of “consciousness recoiling upon itself.” 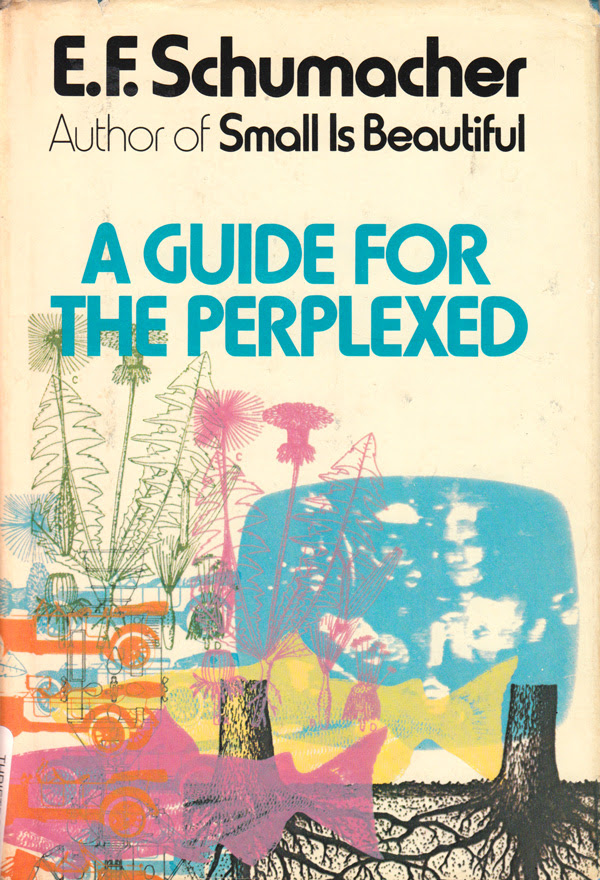 “Never to get lost is not to live, not to know how to get lost brings you to destruction,” Rebecca Solnit wrote in her sublime meditation onhow the art of getting lost helps us find ourselves, “and somewhere in the terra incognita in between lies a life of discovery.” But the maps we use to navigate that terra incognita — maps bequeathed to us by the dominant beliefs and standards of our culture — can often lead us further from ourselves rather than closer, leaving us discombobulated rather than oriented toward the true north of our true inner compass. A decade after his influential meditation on“Buddhist economics,” British economic theorist and philosopher E.F. Schumacher set out to explore how we can improve those maps and use them to better navigate the meaning of life in his magnificent 1977 essay collectionA Guide for the Perplexed (public library).
Schumacher begins with an apt anecdotal metaphor for how these misleading maps are handed to us:

On a visit to Leningrad some years ago I consulted a map to find out where I was, but I could not make it out. I could see several enormous churches, yet there was no trace of them on my map. When finally an interpreter came to help me, he said “We don’t show churches on our maps.” Contradicting him, I pointed to one that was very clearly marked. “This is a museum,” he said, “not what we call a ‘living church.’ It is only the ‘living churches’ we don’t show.”
It then occurred to me that this was not the first time I had been given a map that failed to show many of the things I could see right in front of my eyes. All through school and university I had been given maps of life and knowledge on which there was hardly a trace of many of the things that I most cared about and that seemed to me to be of the greatest possible importance for the conduct of my life. I remembered that for many years my perplexity was complete; and no interpreter came along to help me. It remained complete until I ceased to suspect the sanity of my perceptions and began, instead, to suspect the soundness of the maps. 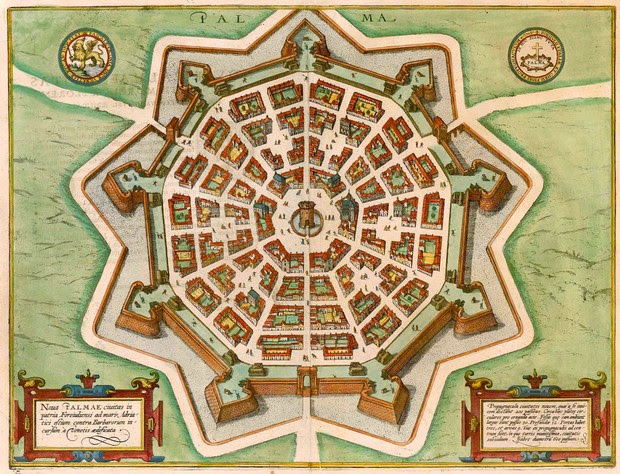 Map of Palmanova, from Umberto Eco's 'Legendary Lands.' Click image for more.
Instead, Schumacher set out to “look at the whole world and try to see it” — which requires examining what it really means to map knowledge and meaning in life, including its invisible, unprovable layers. Peering into the history of “philosophical mapmaking,” he writes:

The maps of real knowledge, designed for real life, showed nothing except things which allegedly could be proved to exist. The first principle of the philosophical mapmakers seemed to be “If in doubt, leave it out,” or put it into a museum. It occurred to me, however, that the question ofwhat constitutes proof was a very subtle and difficult one. Would it not be wiser to turn the principle into its opposite and say: “If in doubt, show it prominently“? After all, matters that are beyond doubt are, in a sense, dead; they do not constitute a challenge to the living.
To accept anything as true means to incur the risk of error. If I limit myself to knowledge that I consider true beyond doubt, I minimize the risk of error but I maximize, at the same time, the risk of missing out on what may be the subtlest, most important and most rewarding things in life. 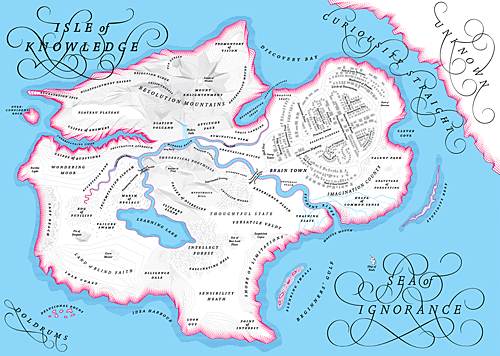 'Isle of Knowledge' by Marian Bantjes. Click image for details.
To do that, however, we need a tolerance for doubt — more than that, anactive embrace of uncertainty. Corroborating the idea that our compulsion for plans limits us, Schumacher cites the famous José Ortega y Gasset line that “life is fired at us point-blank” and writes:

We cannot say: “Hold it! I am not quite ready. Wait until I have sorted things out.” Decisions have to be taken that we are not ready for; aims have to be chosen that we cannot see clearly. This is very strange and, on the face of it, quite irrational. Human beings … hesitate, doubt, change their minds, run hither and thither, uncertain not simply of how to get what they want, but above all of what they want.

Mapping our wants is a core part of the human journey. If we don’t do that, Schumacher argues, we are “left in total perplexity.” But the art of existential mapmaking is a delicate one:

Mapmaking is an empirical art which makes use of a high degree of abstraction but none the less clings to reality with something akin to self-abandonment. Its motto, in a sense, is “Accept everything; reject nothing.” If something is there, if it has any kind of existence … it must be indicated on the map, in its proper place. 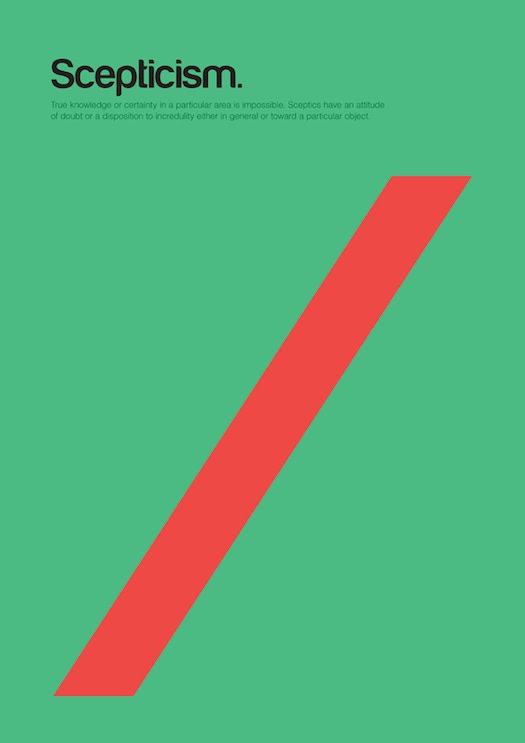 Graphic for Skepticism from 'Philographics,' a visual dictionary of philosophy. Click image for more.
But as Rationalism and Skepticism rose to power in philosophy, Schumacher argues they wrought a “very great impoverishment” in the ability to map abstraction, because these movements “strove with determination, not to say fanaticism, to get rid of the vertical dimensions [of being],” the distinction between lower- and higher-order ideals that traditional wisdom distinguished between. He writes:

Thus the maps ceased to be of any help to people in the awesome task of picking their way through life.
[...]
The loss of the vertical dimension meant that it was no longer possible to give an answer, other than a utilitarian one, to the question, “What am I to do with my life?” The answer could be more individualistic-selfish or more social-unselfish, but it could not help being utilitarian: either “Make yourself as comfortable as you can” or “Work for the greatest happiness of the greatest number.”
[...]
Without the qualitative concepts of “higher” and “lower” it is impossible to even think of guidelines for living that lead beyond individual or collective utilitarianism and selfishness.

To remedy this flattening, Schumacher maps out four essential “Levels of Being” and proposes a model — a formula of sorts — for how they relate to one another and where they belong on the philosophical map: m marks the “mineral level” of inorganic matter; x is the “life force” of organic matter, which animates plants and animals, setting them apart from rocks; y denotes consciousness, which distinguishes a cat from catnip (though it has been argued, since Schumacher’s time, that plants may have a consciousness-like capacity); and z, which denotes the human capacity for self-awareness. Schumacher considers this uniquely human — though, one could presently argue, questionably so — faculty:

This power z has undoubtedly a great deal to do with the fact that man is not only able to think but is also able to be aware of his thinking. Consciousness and intelligence, as it were, recoil upon themselves. There is not merely a conscious being, but a being capable of being conscious of its consciousness; not merely a thinker, but a thinker capable of watching and studying his own thinking. There is something able to say “I” and to direct consciousness in accordance with its own purposes, a master or controller, a power at a higher level than consciousness itself. This power z, consciousness recoiling upon itself, opens up unlimited possibilities of purposeful learning, investigating, exploring, and of formulating and accumulating knowledge.
[...]
We must, however, take great care always to remember that such a word label is merely (to use a Buddhist phrase) “a finger pointing to the moon.” The “moon” itself remains highly mysterious and needs to be studied with the greatest patience and perseverance if we want to understand anything about man’s position in the Universe.

By this model, then, a rock is described as m, a plant as m + x, an animal as m + x + y, and a human being as m + x + y + z. Where scientific reductionism and philosophies like Skepticism fall short, Schumacher argues, is in dealing with the lowest level, m, and pretending the rest don’t exist. He writes: 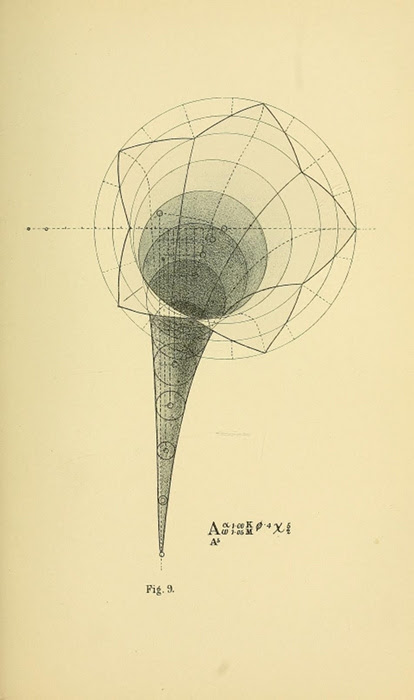 Illustration from 'Geometrical Psychology,' Benjamin Betts's 19th-century mathematical diagrams of consciousness. Click image for more.
It is from the ineffable power of z — “consciousness recoiling upon itself” — that our core humanity springs, and it is through harnessing this power that we can reach our highest potentiality along the vertical dimension:

Because of the power of self-awareness (z), [the human] faculties are indeed infinite; they are not narrowly determined, confined, or “programmed”… Once a human potentiality is realized, it exists. . . .
This “open-endedness” is the wonderful result of the specifically human powers of self-awareness (z), which, as distinct from the powers of life and consciousness, have nothing automatic or mechanical about them. The powers of self-awareness are essentially a limitless potentiality rather than an actuality. They have to be developed and “realized” by each human individual if he is to become truly human, that is to say, a person.
[...]
Self-awareness is the rarest power of all, precious and vulnerable to the highest degree, the supreme and generally fleeting achievement of a person, present one moment and all too easily gone the next.

But self-awareness, Schumacher implies, also makes us invariably aware of the other — of our fellow human beings — without whom our individual experience would be vacant of meaning. Once again, he rebels against reductionism:

The most “real” world we live in is that of our fellow human beings. Without them we should experience a sense of enormous emptiness; we could hardly be human ourselves, for we are made or marred by our relations with other people. The company of animals could console us only because, and to the extent to which, they were reminders, even caricatures, of human beings. A world without fellow human beings would be an eerie and unreal place of banishment; with neither fellow humans nor animals the world would be a dreadful wasteland, no matter how luscious its vegetation. To call it one-dimensional would not seem to be an exaggeration. Human existence in a totally inanimate environment, if it were possible, would be total emptiness, total despair. It may seem absurd to pursue such a line of thought, but it is surely not so absurd as a view which counts as “real” only inanimate matter and treats as “unreal,” “subjective,” and therefore scientifically nonexistent the invisible dimensions of life, consciousness, and self-awareness.

He returns to the progression between the levels and considers our ultimate human potentiality:

At the level of animal … the power of doing, organizing and utilizing is immeasurably extended; there is evidence of an “inner life,” of happiness and unhappiness, confidence, fear, expectation, disappointment and so forth. Any being with an inner life cannot be a mere object: it is a subject itself, capable even of treating other beings as mere objects, as the cat treats the mouse.
At the human level, there is a subject that says “I” — a person: another marked change from passivity to activity, from object to subject. To treat a person as if he or she were a mere object is a perversity, not to say a crime. No matter how such a person may be weighed down and enslaved by circumstances, there is always the possibility of self-assertion and rising above circumstances… There is no definable limit to his possibilities, even though there are practical limitations which he has to recognize and respect. 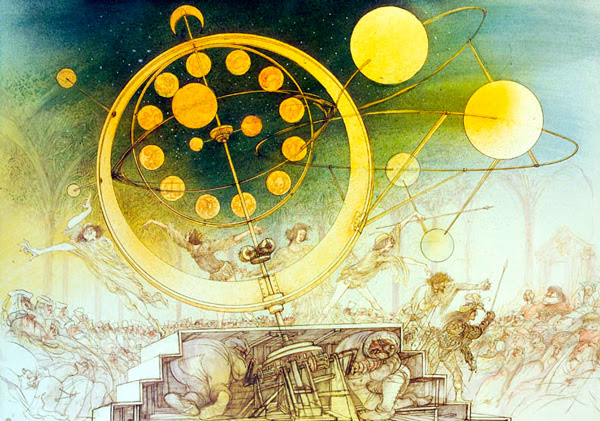 Illustration from Ralph Steadman's visual biography of Leonardo da Vinci. Click image for more.
A Guide for the Perplexed is excellent in its entirety. Pair it with Schumacher on how to stop prioritizing goods over people and Alan Watts on becoming who you really are.
By mimi sato - August 10, 2014