The Book of Trees: 800 Years of Visualizing Science, Religion, and Knowledge in Symbolic Diagrams


The Book of Trees: 800 Years of Visualizing Science, Religion, and Knowledge in Symbolic Diagrams

How the humble tree became our most powerful visual metaphor for organizing information and distilling our understanding of the world. 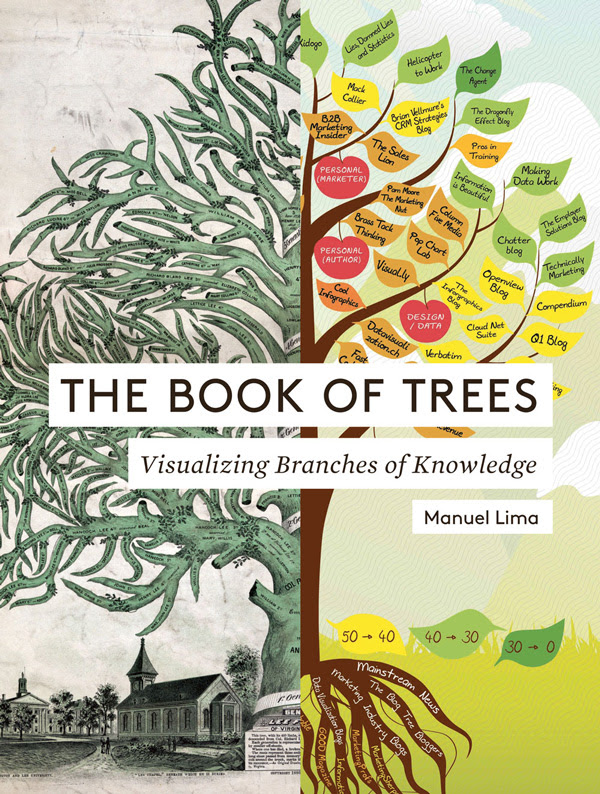 Why is it that when we behold the oldest living trees in the world, primeval awe runs down our spine? We are entwined with trees in an elemental embrace, both biological and symbolic, depending on them for the very air we breathe as well as for our deepest metaphors, millennia in the making. They permeate our mythology and our understanding of evolution. They enchant our greatest poets and rivet our greatest scientists. Even our language reflects that relationship — it’s an idea that has taken “root” in nearly every “branch” of knowledge.
How and why this came to be is what designer and information visualization scholar Manuel Lima explores in The Book of Trees: Visualizing Branches of Knowledge (public library) — a magnificent 800-year history of the tree diagram, from Descartes to data visualization, medieval manuscripts to modern information design, and the follow-up to Lima’s excellent Visual Complexity: Mapping Patterns of Information. 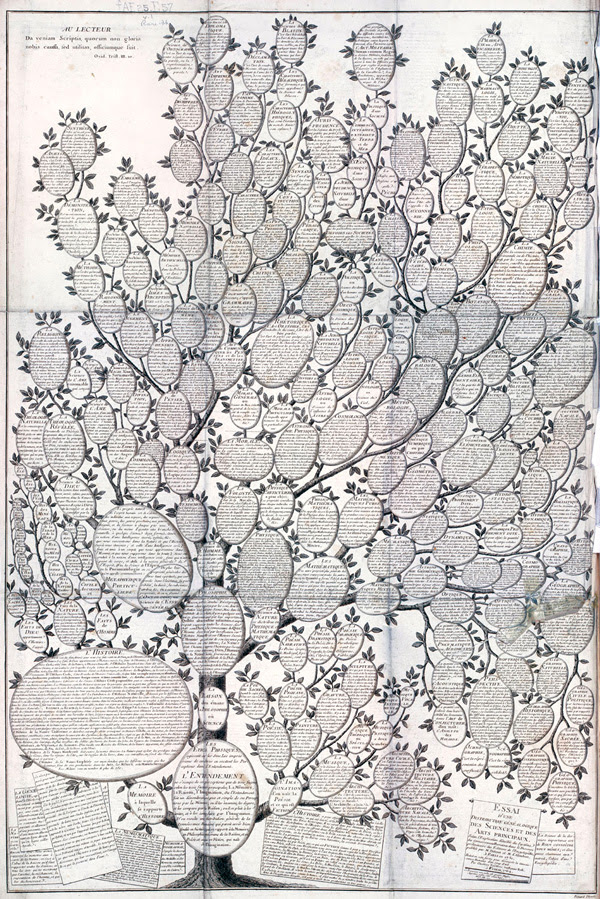 'Genealogical distribution of the arts and sciences' by Chrétien Frederic Guillaume Roth from Encyclopédie (1780)
A remarkable tree featured as a foldout frontispiece in a later 1780 edition of the French Encyclopédie by Denis Diderot and Jean le Rond d'Alembert, first published in 1751. The book was a bastion of the French Enlightenment and one of the largest encyclopedias produced at that time. This tree depicts the genealogical structure of knowledge, with its three prominent branches following the classification set forth by Francis Bacon in 'The Advancement of Learning' in 1605: memory and history (left), reason and philosophy (center), and imagination and poetry (right). The tree bears fruit in the form of roundels of varying sizes, representing the domains of science known to man and featured in the encyclopedia. 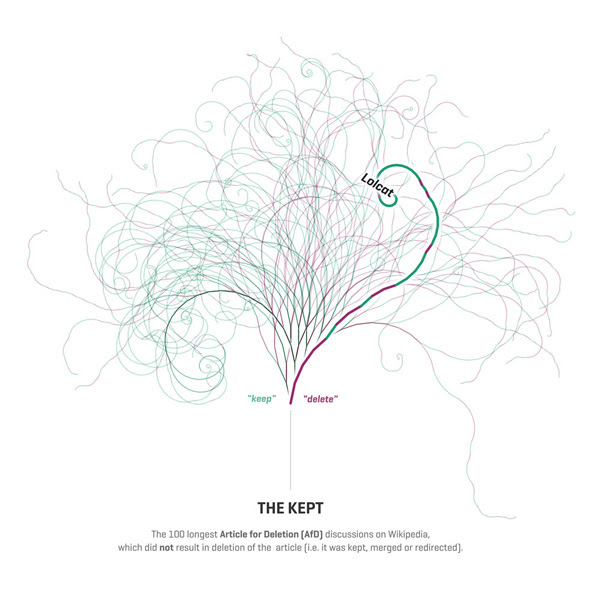 'Notabilia' by Mortiz Stefaner, Dario Taraborelli, and Giovanni Luca Ciampaglia (2011)
A visualization of the 100 longest online discussions on Wikipedia articles up for deletion, part of the collaborative editing process that defines the encyclopedia of our time. These discussions last for at least seven days, until consensus is reached on which of a series of proposed actions (such as keep, merge, rename, or delete) should be performed on a page. Starting from a common root, this visualization maps each of the 100 articles as an individual branch, with color segments and shape determined by the sequence of 'keep' (green) and 'delete' (purple) votes. The final arch of each branch indicates the voting results, bending toward either left (keep) or to the right (delete). 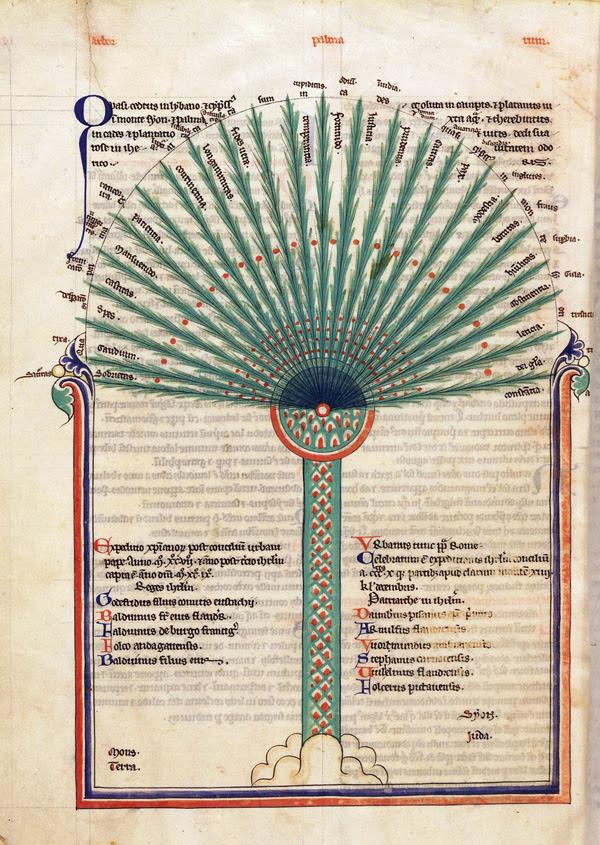 'Tree of virtues' by Lambert of Saint-Omer, ca. 1250
Palm tree illustration from the 'Liber floridus (Book of flowers),' one of the oldest, most beautiful, and best-known encyclopedias of the Middle Ages. Compiled between the years 1090 and 1120 by Lambert, a canon of the Church of Our Lady in Saint-Omer, the work gathers extracts from 192 different texts and manuscripts to portray a universal history or chronological record of the most significant events up to the year 1119. This mystical palm tree, also known as the 'palm of the church,' depicts a set of virtues (fronds) sprouting from a central bulb. The palm tree was a popular early Christian motif, rich in moral and symbolic associations, often used to represent the heavens or paradise. 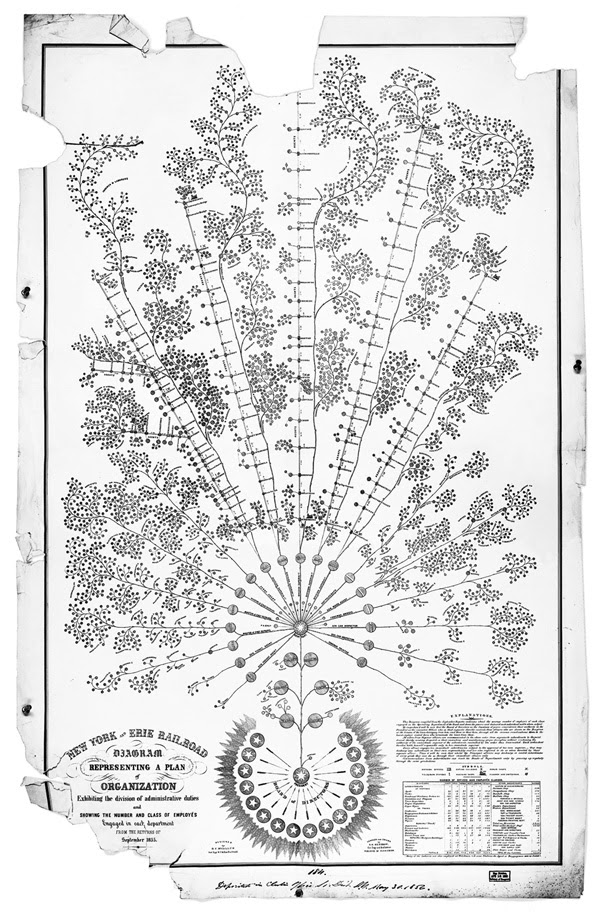 'Plan of Organization of New York and Erie Railroad' by Daniel Craig McCallum (1855)
Diagram viewed by economists as one of the first organizational charts. The plan represents the division of administrative duties and the number and class of employees engaged in each department of the New York and Erie Railroad. Developed by the railroad's manager, the engineer Daniel Craig McCallum, and his associates, the scheme features a total of 4,715 employees distributed among its five main branches (operating divisions) and remaining boughs (passenger and freight departments). At the roots of the imposing tree, in a circular layout, are the president and the board of directors.
Lima writes in the introduction:

In a time when more than half of the world’s population live in cities, surrounded on a daily basis by asphalt, cement, iron, and glass, it’s hard to conceive of a time when trees were of immense and tangible significance to our existence. But for thousands and thousands of years, trees have provided us with not only shelter, protection, and food, but also seemingly limitless resources for medicine, fire, energy, weaponry, tool building, and construction. It’s only normal that human beings, observing their intricate branching schemas and the seasonal withering and revival of their foliage, would see trees as powerful images of growth, decay, and resurrection. In fact, trees have had such an immense significance to humans that there’s hardly any culture that hasn’t invested them with lofty symbolism and, in many cases, with celestial and religious power. The veneration of trees, known as dendrolatry, is tied to ideas of fertility, immortality, and rebirth and often is expressed by the axis mundi (world axis), world tree, or arbor vitae(tree of life). These motifs, common in mythology and folklore from around the globe, have held cultural and religious significance for social groups throughout history — and indeed still do.
[...]
The omnipresence of these symbols reveals an inherently human connection and fascination with trees that traverse time and space and go well beyond religious devotion. This fascination has seized philosophers, scientists, and artists, who were drawn equally by the tree’s inscrutabilities and its raw, forthright, and resilient beauty. Trees have a remarkably evocative and expressive quality that makes them conducive to all types of depiction. They are easily drawn by children and beginning painters, but they also have been the main subjects of renowned artists throughout the ages. 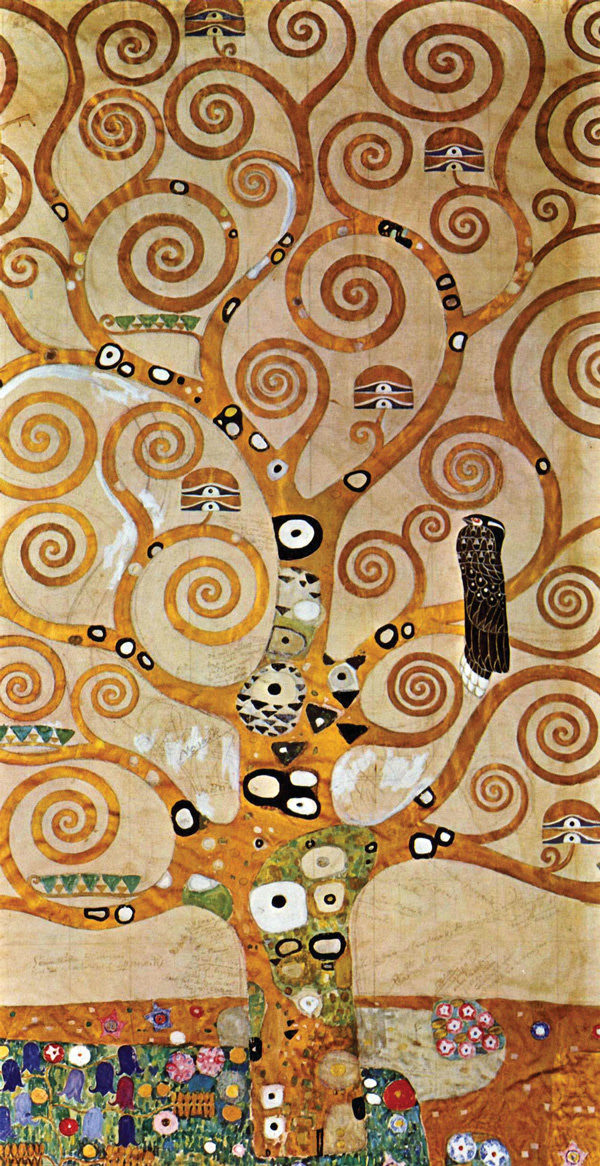 'The Tree of Life' by Gustav Klimt (1901), one of the most reproduced oil paintings in human history
Among the legions of artists captivated by trees was the great Leonardo da Vinci. Shortly before his death, in one of his voluminous notebooks, Da Vinci worked out a mathematical formula for the relationship between the size of a tree’s trunk and that of its branches — he found that as a tree grows, the total cross-sectional area of all new branches is roughly equal to the area of the mother trunk or branch, no matter the height of the tree. Centuries later, scientific tests using computer-generated models of trees have not only found Leonardo’s formula to hold up across nearly every tree species, but also to explain trees’ remarkable resilience to wind and other external forces. 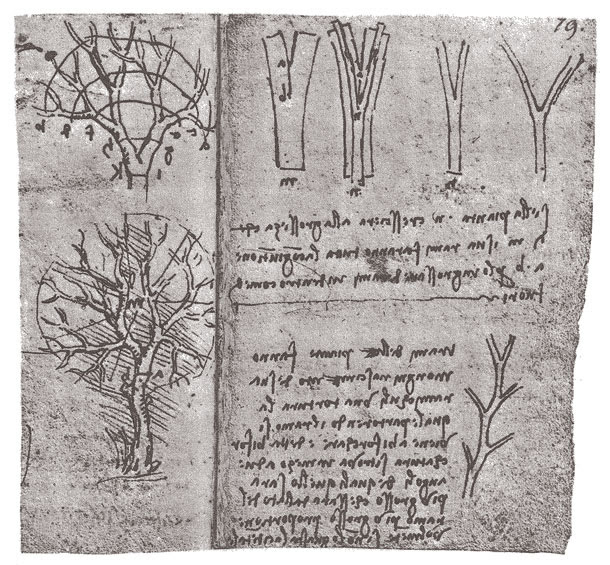 'Tree Branching' by Leonardo da Vinci (ca. 1515)
Study of a tree branching. Leonardo's rule is fairly simple, stating that 'Every year when the boughs of a tree have made an end of maturing their growth, they will have made, when put together, a thickness equal to that of the main stem.'
Indeed, Leonardo’s formula touched on the very thing that makes the tree such a powerful metaphor for organizing knowledge — its natural function not merely as a static object, but also as a system of relational dynamics. Lima writes:

Our primordial, symbolic relationship with the tree can elucidate why its branched schema has provided not only an important iconographic motif for art and religion, but also an important metaphor for knowledge-classification systems. Throughout human history the tree structure has been used to explain almost every facet of life: from consanguinity ties to cardinal virtues, systems of laws to domains of science, biological association to database systems. It has been such a successful model for graphically displaying relationships because it pragmatically expresses the materialization of multiplicity (represented by its succession of boughs, branches, twigs, and leaves) out of unity (its central foundational trunk, which is in turn connected to a common root, source, or origin.)

Anonymous, 'Yggdrasil tree' (ca. 1680)
A depiction of the world tree or cosmic ash tree, from an Icelandic manuscript containing several illustrations from Norse mythology. Yggdrasil is drawn surrounded by various animals, which live in and on it. Of particular relevance is Ratatoskr, a green squirrel on the bottom left, who, according to Norse mythology, runs up and down Yggdrasil to carry messages between the eagle, shown at the top, and the dragon, Niohöggr, who gnaws at the roots. 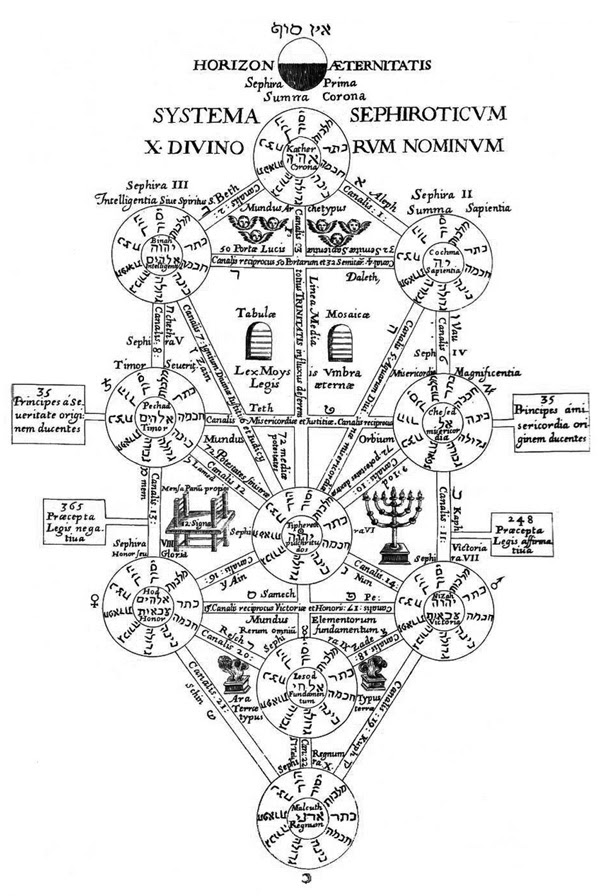 Kabbalistic tree of life from 'Oedipus AEgyptiaus' (1652)
Illustration by the Jesuit scholar and polymath Athanasius Kircher. Kabbalah is a Jewish mystical tradition; the term translates as 'received,' in reference to teachings passed through generations or directly from God. A pivotal element of the Kabbalah wisdom is the tree of life, an image composed of a diagram of ten circles, symbolizing ten pulses, or emanations, of divine energy. 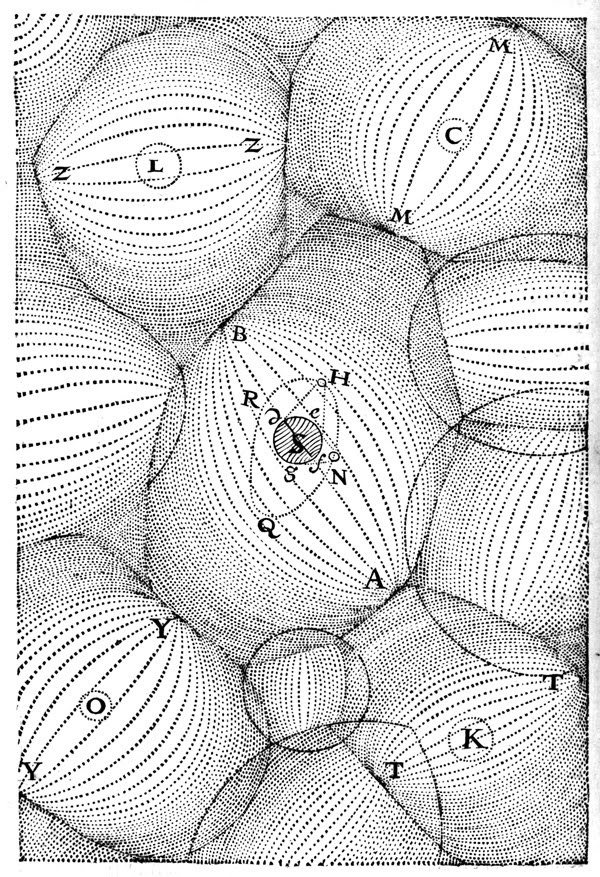 'Vortices' by René Descartes, from Principia Philosophiae (1644)
A model of the universe that was widely accepted in the 17th century, based on the Cartesian system of vortices: large whirlpools of tenuous or ethereal matter that were thought to move the planets and their satellites by contact. 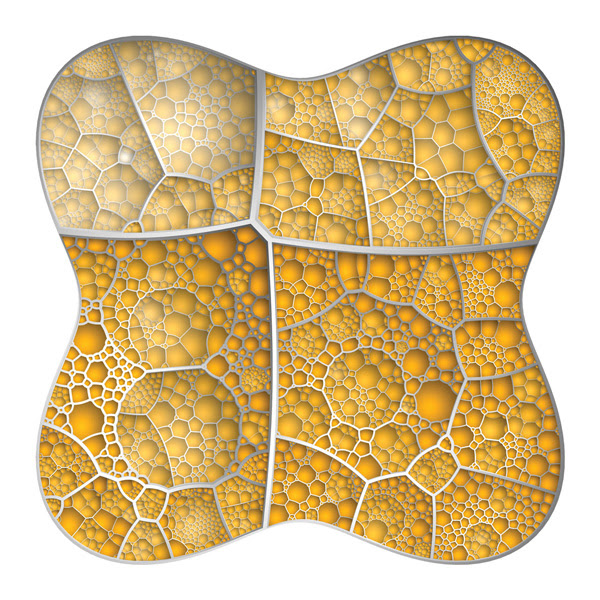 'Voronoi treemap' by Michael Balzer, (2005)
A pioneering alternative to conventional rectangular treemaps that relied on Voronoi tessellation to map hierarchies. In contrast to layout algorithms based on rectangular subdivisions, the Voronoi treemap layout algorithm was the first to generate flexible polygonal subdivisions, eliminating analogous shapes and aspect ratios, while also producing extremely alluring organic layouts.
I was delighted to see a longtime favorite among the selections — Stefanie Posavec’s brilliant Writing Without Words project, a hand-drawn visualization of the “literary organism” in Jack Kerouac’s novel On the Road, depicting the sentences, words, and rhythm structures in the book. 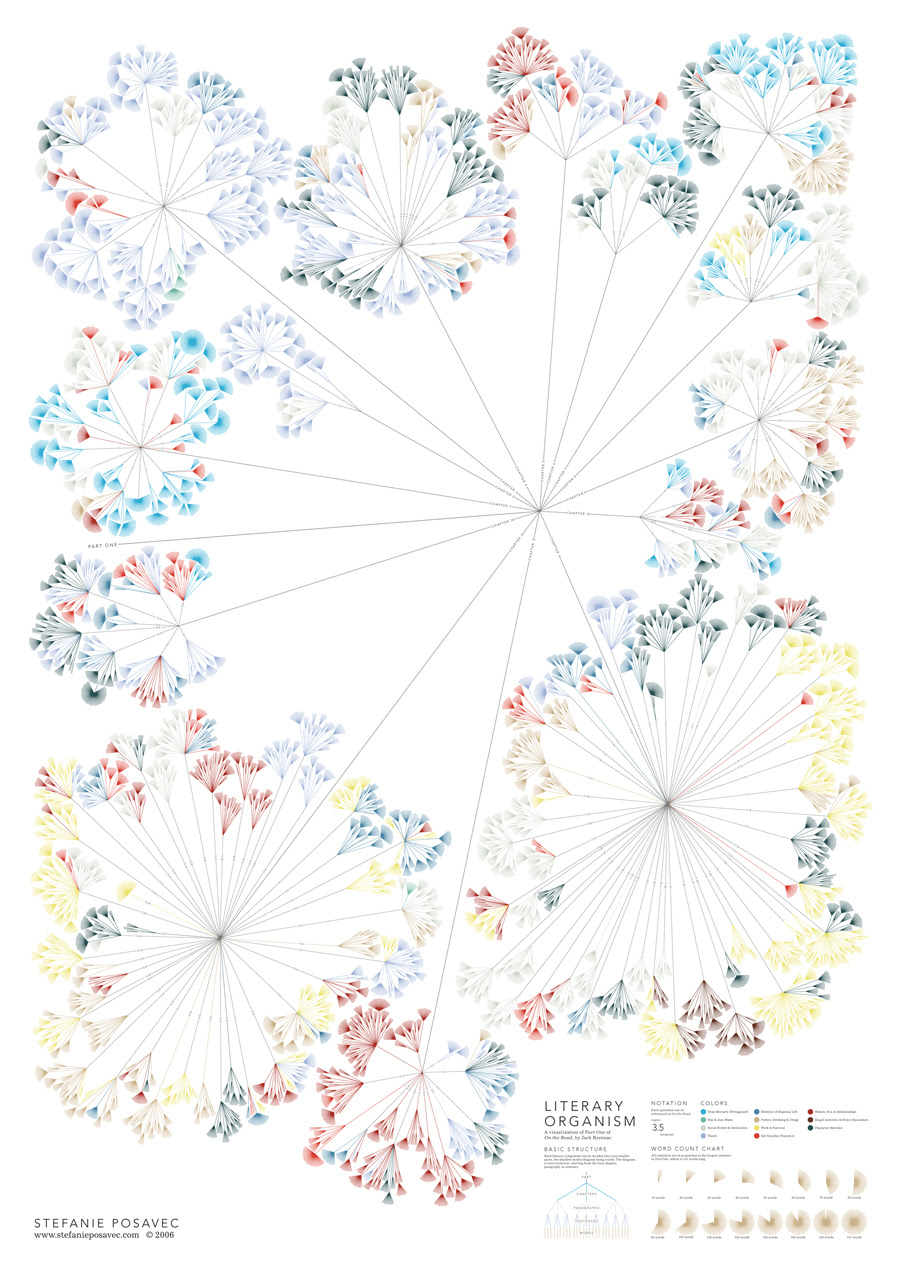 'Writing Without Words' by Stefanie Posavec, (2008)
The Book of Trees is a treasure trove of visual literacy, symbolic history, and cultural insight. Complement it with this visual history of tree diagrams explaining evolution and these glorious drawings of trees from Indian mythology, then revisit Rachel Sussman’s gorgeous photographs of Earth’s oldest living trees.
Images courtesy of Princeton Architectural Press
By mimi sato - August 17, 2014