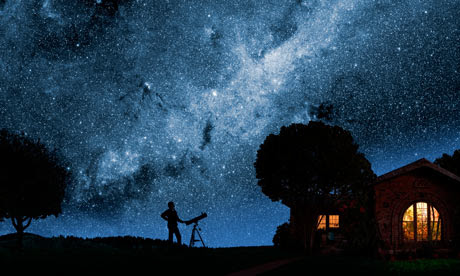 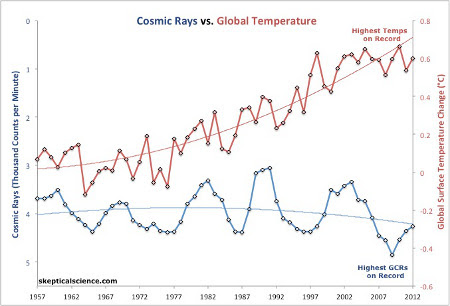 "Recent measurements of the cosmic ray intensity show that … even if cosmic rays enhanced cloud production, there would be a small global cooling, not warming."

Two of the authors of that paper (Sloan & Wolfendale) have also just published another cosmic ray research paper in Environmental Research Letters, finding that the contribution of solar activity and galactic cosmic rays (combined) to global warming is "less than 10% of the warming seen in the twentieth century."
Sloan & Wolfendale also examine the influence of cosmic rays on the climate over the past billion years in another new paper published in the journal New Astronomy. They find that changes in the galactic cosmic ray intensity are too small to account for significant climate changes on Earth. This was also the conclusion of a paper published this May in The Astrophysical Journal.
In another paper just recently published in Environmental Research Letters, Rasmus Benestad of The Norwegian Meteorological Institute compares measured changes in the amount of cosmic rays reaching Earth to changes in temperature, precipitation, and barometric pressure measurements. Benestad finds no statistical evidence that cosmic rays can explain the recent global warming.
Finally, a paper published last month in Geophysical Research Letterscompared measurements of cosmic rays and cloud cover changes, and found no detectable connection between the two. This study is consistent with many previous papers finding that cosmic rays are not effective at seeding clouds.
Thus every step in the galactic cosmic ray-climate hypothesis is fraught with problems. Evidence suggests that cosmic rays are not effective at seeding clouds. Solar activity has been flat, and even slightly downwards over the past few decades. Galactic cosmic ray flux on Earth has been flat, even slightly upwards over the past few decades. 2009, which saw a record number of cosmic rays reaching Earth (meaning it should have been cold), was the 5th-hottest year on record at the time.
This failed hypothesis offers a stark contrast to the overwhelming consensus that our greenhouse gas emissions are driving warming. The latter is supported by solid, well-understood fundamental physics. We know that increasing the greenhouse effect causes more energy to be trapped on Earth, and that energy has to go somewhere. The observed pattern of warming is precisely what we expect to see from an increased greenhouse effect, for example with the 'fingerprint' of a cooling upper atmosphere due to more heat being trapped in the lower atmosphere.
There is overwhelming evidence supporting human-caused global warming, which is why it's supported by a 97 percent expert consensus. Science progresses through constant testing of new ideas. Those that fail to withstand scrutiny, like a significant galactic cosmic ray climate influence, fall by the wayside. Those that hold up to our growing scientific understanding eventually convince the naturally skeptical scientific community and become the expert consensus view.
By mimi sato - November 12, 2013