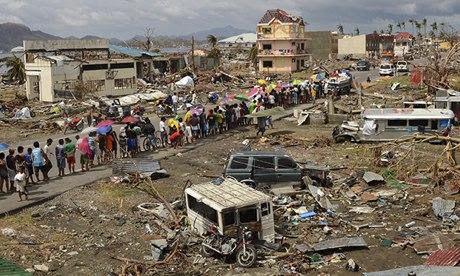 Survivors of Typhoon Haiyan form a queue to receive relief goods at a devasted coastal area in Leyte. Photograph: Dondi Tawatao/Getty Images
Developing nations have launched an impassioned attack on the failure of the world's richest countries to live up to their climate change pledges in the wake of the disaster in the Philippines.
With more than 3,600 people now believed to have been killed by Typhoon Haiyan, moves by several major economies to backtrack on commitments over carbon emissions have put the world's poorest and most wealthy states on a collision course, on the eve of crucial high-level talks at a summit of world powers.
Yeb Sano, the Philippines' lead negotiator at the UN climate change summit being held this weekend in Warsaw, spoke of a major breakdown in relations overshadowing the crucial talks, which are due to pave the way for a 2015 deal to bring down global emissions.
The diplomat, on the sixth day of a hunger strike in solidarity for those affected by Haiyan, including his own family, told the Observer: "We are very concerned. Public announcements from some countries about lowering targets are not conducive to building trust. We must acknowledge the new climate reality and put forward a new system to help us manage the risks and deal with the losses to which we cannot adjust."
Munjurul Hannan Khan, representing the world's 47 least affluent countries, said: "They are behaving irrationally and unacceptably. The way they are talking to the most vulnerable countries is not acceptable. Today the poor are suffering from climate change. But tomorrow the rich countries will be. It starts with us but it goes to them."
Recent decisions by the governments of Australia, Japan and Canada to downgrade their efforts over climate change have caused panic among those states most affected by global warming, who fear others will follow as they rearrange their priorities during the downturn.
In the last few days, Japan has announced it will backtrack on its pledge to reduce its emission cuts from 25% to 3.8% by 2020 on the basis that it had to close its nuclear reactors after the 2011 earthquake and tsunami.
Australia, which is not sending a minister to this weekend's talks, signalled it may weaken its targets and is repealing domestic carbon laws following the election of a conservative government.
Canada has pulled out of the Kyoto accord, which committed major industrial economies to reducing their annual CO2 emissions to below 1990 levels.
China's lead negotiator at the Warsaw talks, Su Wei, said: "I do not have any words to describe my dismay at Japan's decision." He criticised Europe for showing a lack of ambition to cut emissions further, adding: "They talk about ratcheting up ambition, but rather they would have to ratchet up to ambition from zero ambition."
When the highest-level talks start at the summit on Monday, due to be attended by representatives from 195 countries, including energy secretaryEd Davey, the developing world will seek confirmation from states such as Britain that they will not follow the path of Japan and others. David Cameron's comments this weekend in which he backed carbon emission cuts and suggested that there was growing evidence of a link between manmade climate change and disasters such as Typhoon Haiyan, will inevitably be used to pressure others to offer similar assurances.
The developing world also wants the rich western nations to commit to establishing a compensation scheme for future extreme weather events, as the impact of global warming is increasingly felt. And they want firm signals that rich countries intend to find at least $100bn a year by 2020 to help them to adapt their countries to severe climate extremes.
China and 132 nations that are part of the G77 block of developing countries have expressed dismay that rich countries had refused to discuss a proposal for scientists to calculate emissions since the start of the Industrial Revolution.
Ambassador Jose Antonio Marcondes de Carvalho of Brazil, who initially proposed the talks, said: "We were shocked, very much surprised by their rejection and dismissal. It is puzzling. We need to understand why they have rejected it.
"Developing countries are doing vastly more to reduce their emissions than Annexe 1 [rich] countries."
Members of the Disaster Emergencies Committee, which co-ordinates British aid efforts, also warned leaders that the disaster offers a glimpse of the future if urgent action is not taken.
Aid agencies including Christian Aid, Cafod, Care International, Oxfam and Tearfund said ministers meeting in the Polish capital must act urgently because climate change is likely to make such extreme weather events more common in the future, putting millions more lives at risk.
By mimi sato - November 18, 2013