Transition to a low carbon economy fails to pick up pace, report finds

Transition to a low carbon economy fails to pick up pace, report finds

A new report shows the rate of progress on decarbonising the global economy is too slow to meet carbon reduction targets, as CEOs continue to focus on growth, resilience and reputation 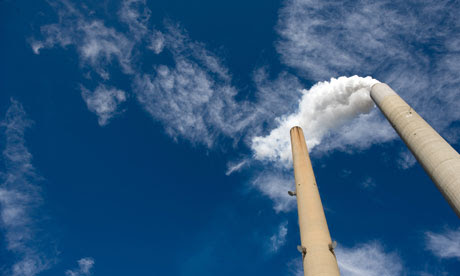 Smoke billows from a so-called 'clean coal' plant in West Virginia that uses carbon sequestration technology. A new report shows that the global economy is not acting faster enough to hit decarbonisation targets. Photograph: Saul Loeb/AFP/Getty Images
Are we too late for two degrees? This was the question posed by last year's PwC report on the carbon intensity of the G20. This year, that question looks hard to justify.
Our analysis, the Low Carbon Economy Index (LCEI) 2013, considers how efficient the global economy will need to be given expected GDP growth and a limited carbon budget. We look at the carbon intensity of the G20 economies – the amount of carbon emitted for every million dollars of GDP – and the rate we are using the two degrees global carbon budget, set out by the recent IPCC's Fifth Assessment Report.
Focusing on the emissions scenario that the scientists say gives the greatest probability of limiting warming to two degrees, the rate of progress to decarbonise the global economy falls far short of what is needed. At the current rate of emissions growth, we will have blown the global carbon budget by 2034.
Since 2007 the improvement in carbon efficiency has averaged a weak 0.7% each year. This means that the reductions needed in the future become increasingly greater. Given such limited progress, last year we said that the decarbonisation rate needed to be 5.1% globally. Today the reduction required is an unprecedented 6.0%.
To achieve this would require halving carbon intensity within the next ten years, and reducing it to one-tenth of today's levels by 2050. By 2100, the global energy system would need to be virtually zero-carbon.
An indication of how little good news there is on emissions, is that the biggest success story in 2012 is about natural gas – not renewables, nuclear, efficiency or carbon capture and storage. The shale gas revolution in America shows that rapid decarbonisation is possible. Countries like France, Argentina and Brazil are good examples of low carbon economies, and by setting a carbon budget, the UK provides a model for how countries may set targets in future.
Financing and consumer behaviour remain difficult hurdles. More investment is needed in low carbon technology to bring down the costs of near-commercial technologies such as CCS and second generation biofuels. But low carbon products need to be desirable – cool even – if consumers are to demand them.
It's also become more apparent that decarbonisation in one country can just shift emissions around the world. The shale revolution prompted a rapid switch to gas generation and an impressive decarbonisation rate in America. But the fall in coal prices combined with low carbon prices has seen an increase in coal consumption in the EU and elsewhere.
It's a prime example of how, even in these early days of the journey down a low carbon pathway, we are being forced to make awkward compromises between growth, the competition for cheap and secure energy, and the environment. So it's only with voter and consumer support that we can place the final piece in our climate puzzle – a global deal.
The main finding of our LCEI reports has become somewhat repetitive – current rates of decarbonisation are not nearly rapid enough to avoid serious climate risks. CEOs focus is not on the IPCC climate scenarios, but on growth, costs, resilience and reputation. What's becoming apparent is that climate change will impact each of these issues.
So for many companies the challenge now is to translate climate risks into business risks, and stakeholder concerns. We're at only the early stages of being able to measure, understand and compare the trade-offs between different options – the total impact of businesses and their decisions – and a much more complete knowledge of their overall risks and impact is needed. Recent stories surrounding investor pressures on pension investments in fossil fuel are only one example. It demonstrates how climate change and the low carbon transition has real implications for a raft of corporate and national investments in carbon intensive technologies, and other major infrastructure that are currently being planned and executed today.
Governments, investors, customers and communities are facing different, often contradictory, demands. We want affordable, profitable, reliable, low carbon and low impact growth. But it's clear from company responses to the recent CDP report that there are few signs that economies or businesses are going far enough, or fast enough to decouple this growth from their carbon emissions. So companies and governments struggle to make these difficult trade-offs.
Underlying the Low Carbon Economy Index are fundamental questions about growth. While our analysis assumes long term moderate economic growth in emerging economies, and slow steady growth in developed economies, failing to tackle climate change is unlikely to result in such a benign scenario of steady growth.
Jonathan Grant is director at PwC Sustainability & Climate Change. Click here for more about the Low Carbon Economy Index 2013.
Join the community of sustainability professionals and experts. Become a GSB member to get more stories like this direct to your inbox
By mimi sato - November 03, 2013