A 2,000km road and river odyssey in Brazil reveals consensus from all sides: Bolsonaro has ushered in a new age of wrecking
by Tom Phillips in Palmeiras, Rondônia state with photographs by Avener Prado
Shares
2,236
﻿From afar, it resembles a tornado: an immense grey column shooting thousands of feet upwards from the forest canopy into the Amazonian skies.
Up close it is an inferno: a raging conflagration obliterating yet another stretch of the world’s greatest rainforest as a herd of Nelore cattle looks on in bewilderment.
“It started this morning,” said Valdir Urumon, the chief of an indigenous village in this isolated corner of Rondônia state, as the vast pillar of smoke loomed over his settlement’s palm-thatched homes.
By late afternoon, when the Guardian arrived on the scene, the fire had intensified into a catastrophic blaze, streaking north through a strip of jungle perhaps two miles long.
Huge plumes of smoke drifted skywards as if this sweep of woodland near Brazil’s north-western border with Bolivia had been subjected to a ferocious bombing campaign.
At the farmhouse nearest to the blaze the lights were on but not a soul was to be seen – much less anyone who might extinguish the giant pyre.
But two empty petrol barrels and a cluster of plastic jerrycans dumped at its entrance hinted at a possible culprit – a cattle rancher torching yet another swath of the Brazilian jungle in order to expand his Amazon domain.
Three weeks after Brazil’s unusually severe burning season sparked an international storm, the far-right government of Jair Bolsonaro has launched a global PR campaign to try to convince the world everything is under control.
“The Amazon is not burning, not burning at all,” Brazil’s foreign minister, Ernesto Araújo, insisted in an interview with CNN.

Read more
Rondônia’s governor, the Bolsonaro ally Marcos Rocha, took an identical line, dismissing the “fuss” over the fires as a foreign ruse to shackle Brazil’s economy.
Rocha, a retired police colonel, said: “If we look at the situation in other countries, their forests are burning much more than here in our Brazil. You go to London, or other countries, and what do you see?
“It’s not fog – it’s smoke! Smoke from burning; from industry. So how can they demand of us what they haven’t done themselves?”
João Chrisóstomo, a Bolsonarian congressman in Rondônia’s capital, Porto Velho, rejected claims that Brazil was entering a new era of Amazon devastation and insisted – contrary to a growing body of evidence – that conservation was a top priority in Bolsonaro’s Brazil.
Statistics produced by Brazil’s own space institute – whose director was sacked last month after clashing with Bolsonaro – show deforestation has surged in recent months with a Manhattan-sized area lost every day in July.
But Chrisóstomo maintained Bolsonaro was “making every effort to stop unbridled deforestation” and chastised European leaders, such as Emmanuel Macron, who have questioned Bolsonaro’s vision for the Amazon.
Chrisóstomo seethed: “He’s not Brazil’s president. He’s not even from the Americas. This forest isn’t shared, as he claims. It belongs to a nation which enjoys complete autonomy and authority to decide what happens to the forest and takes every possible care to preserve it.”
That last claim rang hollow this week as the Guardian travelled almost 2,000km by road and river through two of the Amazon states worst affected by this year’s fires, Rondônia and Amazonas.
Along the way, an almost identical refrain emerged from the mouths of indigenous leaders, wildcat goldminers, environmental activists and government officials: that Bolsonaro’s stripping back of protections and anti-environmental rhetoric had contributed to the scale of the fires – more than 30,000 of which were recorded in August alone – and set in motion a new age of wrecking that looks set to continue beyond the end of the annual burning season next month.
“It is chaos. Chaos, chaos, chaos,” lamented one senior official from Brazil’s environmental agency, Ibama, who spoke on the condition of anonymity.
“If we go on like this, things will get worse and worse,” predicted the official, diplomatically blaming the spike in Amazon deforestation during Bolsonaro’s first eight months in power on the “political situation” in Brazil.
Life has never been easy for the activists and government agents seeking to slow rainforest destruction in a vast region many still call Brazil’s “faroeste” (wild west).
In the riverside town of Humaitá in Amazonas state, Ibama’s former headquarters lies in ruins two years after it was stormed, ransacked and burned to the ground by illegal goldminers in retribution for a crackdown.
Now, as the dismantling of Brazil’s environmental protection system gathers pace, its operations there are to halt altogether.
Three regional Ibama offices – in Humaitá, Parintins and Tabatinga – are in the process of being deactivated, leaving only one central command post in the capital, Manaus, to tackle environmental crime in a state three times the size of Spain. 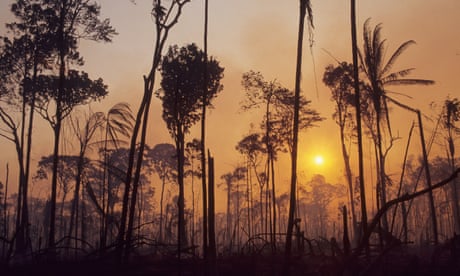 Read more
In a recent letter to Ibama’s new president, several hundred officials voiced “immense concern” over the direction environmental protection was taking.
Márcio Tenharim, an indigenous leader from a reserve near Humaitá, said he feared the influx of soy farmers, ranchers and mining companies would accelerate as Brazil’s president pushed for such activities to be allowed on previously protected areas.
“We aren’t ready for this,” said Tenharim, predicting such “development” would bring “nothing but misery” for his people.
Bolsonaro denies that will be the case – and many in the region see his Amazon blueprint as a boon.
“He’s our hope for improvement,” said Martins Tavares, 33, a goldminer who said he and virtually all of his colleagues backed Bolsonaro, believing his promises to open up the Amazon would help them feed their families.
Rui Souza, the owner of waterside petrol station in Humaitá that sells to goldseekers, said he was also optimistic Bolsonaro would do away with environmental and indigenous reserves so they could be commercially exploited.
“Our Amazonia is so rich, my friend. But we’re not allowed to use any of it,” the 65-year-old complained.
In Rondônia – where 72% of voters backed the far-right candidate in last year’s election – support is even more widespread. Bolsonarian billboards dot the highways declaring: “Together we will change the destiny of Rondônia and Brazil!”
“Nearly everyone here voted for him,” said Vicente Costa, a 69-year-old restaurant owner in the town of Araras, whose silver SUV was plastered with Bolsonaro stickers reading: “Change Brazil for real.”
That delight contrasts with the growing despair of many forest dwellers whose lives were upended in the 1960s when Brazil’s military dictatorship bulldozed roads through the Amazon.
“During his campaign Bolsonaro promised to divide up indigenous lands. That’s why the ranchers voted for him. But we don’t want to share our land,” said Valdillene Urumon, 28, as the fire continued to rage near her village.
“We felt sad [when Bolsonaro won]. But now we have to fight, don’t we?”
Chrisóstomo insisted fears for the future of Brazil’s forests were “totally misplaced”.
But on the rural outskirts of Humaitá another fire had broken out and as night fell two local firefighters battled in vain to contain it.
“The environment is so crucial to us, isn’t it?” one firefighter said as he paused from smothering the flames with a rubber damper. “It saddens us to see it being destroyed like this.”
It was, as usual, impossible to know who had started the fire, or why. But the men struggling to douse it suspected criminal intent, warning the Guardian to leave in case the firestarter still lurked in the shadows.
As the flames ripped across a prairie his hose was not long enough to reach, the sergeant looked on in exhaustion and dismay.
“Every year we do campaigns [against fire-starting] but it’s as if the more campaigns you do the worse it gets,” he said. “It leaves us with little faith humans will ever understand they need to protect the environment.”

As the crisis escalates…

… in our natural world, we refuse to turn away from the climate catastrophe and species extinction. For The Guardian, reporting on the environment is a priority. We give reporting on climate, nature and pollution the prominence it deserves, stories which often go unreported by others in the media. At this pivotal time for our species and our planet, we are determined to inform readers about threats, consequences and solutions based on scientific facts, not political prejudice or business interests.
More people are reading and supporting The Guardian’s independent, investigative journalism than ever before. And unlike many news organisations, we have chosen an approach that allows us to keep our journalism accessible to all, regardless of where they live or what they can afford. But we need your ongoing support to keep working as we do.
The Guardian will engage with the most critical issues of our time – from the escalating climate catastrophe to widespread inequality to the influence of big tech on our lives. At a time when factual information is a necessity, we believe that each of us, around the world, deserves access to accurate reporting with integrity at its heart.
Our editorial independence means we set our own agenda and voice our own opinions. Guardian journalism is free from commercial and political bias and not influenced by billionaire owners or shareholders. This means we can give a voice to those less heard, explore where others turn away, and rigorously challenge those in power.
We need your support to keep delivering quality journalism, to maintain our openness and to protect our precious independence. Every reader contribution, big or small, is so valuable. Support The Guardian from as little as $1 – and it only takes a minute. Thank you.
By mimi sato - September 10, 2019