2013 in review: a year of increasing extreme weather events


2013 in review: a year of increasing extreme weather events

John Vidal looks back at a year of record heatwaves, floods, rainstorms and cyclones A skater speeds away on the rain-wet ice on lake Orlangen, south of Stockholm, Sweden. Photograph: Tobias Rostlund/AFP/Getty Images
2013 was the seventh warmest year on record and saw one of the strongest cyclones, some of the longest heatwaves and the most topsy-turvy weather experienced in decades.
Nowhere is thought to have witnessed faster change than Nikkaluokta, a small Lapland village above the Arctic circle in northern Sweden. On 3 December, it was enjoying an unseasonally warm 4.7C. Within a few days, the temperature had dropped to a bone-chilling -40.8C (-41.4F) but on 10 December it rose again in just a few hours to a balmy 7.7C. The 48.5C rise in under 48 hours is one of the greatest ever recorded and is comparable to the world's fastest-temperature rise: 27C in just two minutes in Spearfish, South Dakota back in 1943. 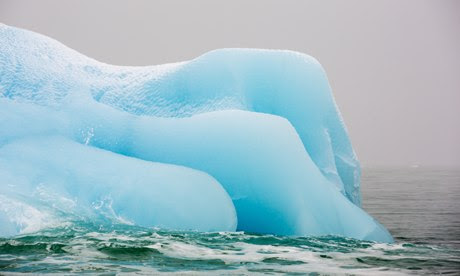 An iceberg floats off a glacier in northern Svalbard, Spitsbergen, Norway. All of Svalbards glaciers are retreating, even in the north of the archipelago despite only being around 600 miles from the north pole. Photograph: Ashley Cooper/Corbis
What happened in Lapland was, on the surface at least, not unusual, abrupt short-term weather change possibly caused by a convoluted jet stream. But in a major report this month, the US National Research Council warned that abrupt climate change was already being seen with the collapse of the Arctic sea ice and in extinction rates. The good news, it said, was that most of the extreme climate predictions made over the past decade, such as an upwelling of methane from the bottom of the oceans or a shutdown of the Atlantic conveyor, were extremely unlikely – at least in the medium term. But the message was clear: if temperatures go on rising, expect the unexpected over the next 100 years.
The IPCC 5th assessment report, which is considered the consensus of world scientists, was unequivocal that climate change was happening fast. In September, it stated that each of the last three decades had been successively warmer at the Earth's surface than at any preceding decade since measurements started in 1850. The period 1983-2012 was probably the warmest in the past 1,400 years, it said, and both the Greenland and Antarctic ice sheets were losing mass, along with most glaciers worldwide. 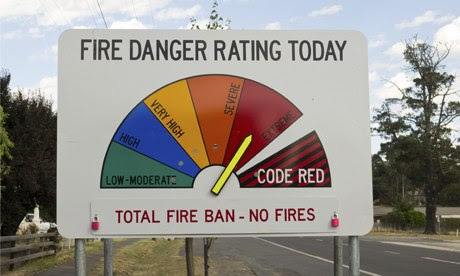 A sign in the main street of Taradale indicates extreme fire danger and a total fire ban throughout the area. Authorities declared a day of total fire ban for the entire state of Victoria, Australia, as the area continued to experience unusually high temperatures. The risks of fire danger were rated as extreme. Photograph: David Reid/Corbis
The Arctic in 2013 saw nowhere near as much sea ice loss as the exceptional 2012 when all records were broken by nearly 20%, but the relatively cool year still witnessed the sixth greatest ice loss since observations began in 1979. All seven lowest minimum ice extents have now occurred in the past seven years. Significantly for sea level rise, IPCC scientists said the loss of ice from Greenland's ice sheet, which is situtated on land, has probably increased from around 34bn tonnes a year in the last decade of the 20th century to 215bn tonnes a year today. 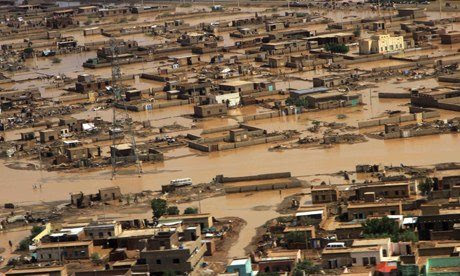 An aerial view of the area affected by floods caused by heavy rains in Khartoum, Sudan. Photograph: Stringer/Reuters
Confusingly, sea ice, which grows in winter months and retreats in summer each year, has steadily been growing in Antarctica. In September, the end of the southern hemisphere's winter, the ice extended to 19.51m sq kms, breaking a 35-year record. This, said some climate contrarians, showed for a fact that global warming was not happening. But scientists elsewhere countered that the ice growth was probabaly being driven by the convergence of stronger winds near the south pole. Latest observations from Europe's ice-monitoring satellite, CryoSat, suggests that the west Antarctic ice sheet appears to be shedding far more ice than just a few years ago, from around 30bn tonnes a year in the 1990s to around 147bn tonnes a year now as major glaciers retreat.
Despite Antarctica's simultaneous warming and cooling phenomena, thesecond lowest temperatures ever measured on Earth was recorded in July at Dome Argus in the centre of the Antarctic plateau. The previous record low was -89.2C in 1983 at the Russian Vostok research station in east Antarctica. But a Nasa satellite this year detected an extraordinary -93.0C on July 10. This was marginally above the -93.2C recorded there in 2010*. Because neither temperature was measured on land, they will not be registered as official records. 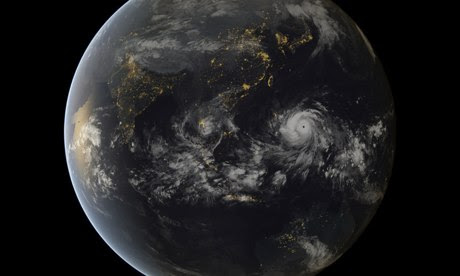 A digital composite of typhoon Haiyan approaching the Philippines. This satellite image shows the fearsome size of the typhoon as it headed towards the Philippines. Photograph: Japan Meteorological Agency/Barcroft Media
Heat extremes dominated the year. The last four months of 2012 were abnormally hot in Australia but January 2013 was the hottest month ever measured on the continent, with record temperatures being set in every state and territory and the highest recorded maximum of 49.6C at Moomba in South Australia. Temperatures were regularly above 48C, the Bureau of Meteorology added a new temperature colour to its maps and Sydney experienced its hottest night on record when it was still 34C at midnight on 10 January. According to the since axed Australian Climate Commission, Australians should get used to it: not only are heatwaves getting longer, hotter and more frequent, the number of record hot days is expected to quadruple in Sydney by the end of the century.
Portugal, China, Hungary, Finland, and Britain, all recorded heatwaves, and the temperature in Death Valley, California hit 129.2F (54.0C), the hottest temperature ever recorded on Earth during June. Meanwhile,Shanghai had 24 days with temperatures at or above 35C in July and recorded 40.6C, the highest ever temperature recorded in 140 years of records in the city. Northeast Brazil, which often suffers long droughts, experienced its worst in 50 years followed last week by massive floods.
Europe, overall, was warmer than usual but the heat turned quickly to massive rainstorms. As much rain fell in a few hours in June in central Europe as normally falls in two months. The Czech Republic , Austria, south and east Germany, Switzerland, Slovakia, Belarus, Poland, Hungary and Serbia all experienced heavy flooding in what were desribed as one in 100 year rains. In some places in Austria, 150 to 200mm of rain (5.9 to 7.9 inches) fell in a day.
Less high-profile were massive floods in Sudan, where more than 250,000 people were forced from their homes in August. The region around the capital, Khartoum, was particularly badly hit, with at least 15,000 homes destroyed and thousands of others damaged.
The heat was also seen in the oceans. The journal Sceince reported that since 1950 Pacific Ocean waters had been warming at a rate 15 times faster than the rest of the seafloor. This suggested to some that the ocean depths may store more heat from global warming than suspected. The Pacific Ocean, in particular, seems to be absorbing more heat than at any other time in the past 50 years.
Because the strength of tropical storms is linked to ocean temperature, it came as a surprise that the 2013 Atlantic Ocean hurricane season was one of the weakest recorded in 50 years. There were no majorhurricanes in the Carribean, Gulf of Mexico or the Atlantic basin and only Ingrid and Humberto out of the 13 named storms reached hurricane strength.
It was a very different story in the western-north Pacific however, where 30 major storms had been recorded by early November. Thirteen of them were typhoon-strength, the biggest by some way being typhoon Haiyan, possibly the most powerful tropical cyclone to make landfall in recorded history. Haiyan smashed into the southern Phillippines, killing 6,000 people and wreaking massive damage.
The World Meteorological Organisation said that it was impossible to blame climate change for individual storms but increasing evidence emerged during the year that there was a link. When in January 2013 scientists at the US National Oceanic and Atmospheric Administration (NOAA), the UK's Met Office, and the research teams from 16 other global institutions tried to calculate how much climate change had possibly influenced 12 extreme weather events that occurred in 2012,they concluded that it had helped raise the temperatures during the run of 37.7C days in last year's US heatwave, and was behind the record loss of Arctic sea ice and the storm surge of hurricane Sandy, plus several other extremes.
The weather year ended in a similar turmoil to how it had started – with hail falling in Cairo, snow in Israel, Syria and Jordan, and record high temperatures in Scandinavia and unseasonable heat on the Gulf Coast of the United States.
*How cold is that? About 10C colder than anything ever recorded in Alaska or Siberia. The lowest temnperatures ever recorded in Britain was a relatively mild -27C in Scotland in 1982, and -23C in 1994 in Australia.
By mimi sato - December 18, 2013