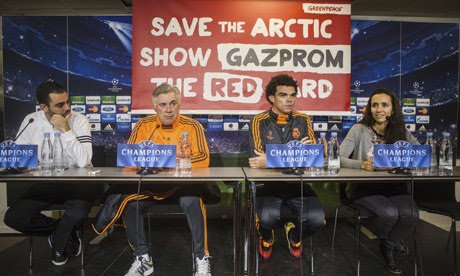 A Greenpeace banner steals the attention away from a Real Madrid press conference in Copenhagen, Denmark. Photograph: Nikolai Linares/AFP/Getty Images
Greenpeace will step up its campaign to confront oil companies working in the Arctic, but has not decided whether to attempt to board Russian oil platforms, again, its UK director said .
Speaking after it was announced that an amnesty approved by the Russian parliament would cover the Arctic 30 protesters, John Sauven said that the arrests had backfired spectacularly on the Russian authorities by creating an "iconic" campaign that had gained global attention.
There have been 860 protests in 46 countries, with more than 2.6 million people writing to embassies. Celebrities including Paul McCartney, Madonna, Jude Law and Ewan McGregor offered support as well as Nobel prize winners including Desmond Tutu and Aung San Suu Kyi.
Russia was also wrongfooted by the political support Greenpeace received from Angela Merkel, David Cameron, François Hollande, Ban Ki-moon and Hillary Clinton.
The campaigners' incarceration would not deter Greenpeace from campaigning on Arctic drilling. "Going to the Arctic is not going to change. That's certain. But we haven't thought 'what next'. We haven't thought through whether we should confront Gazprom or Russia again," Sauven said.
"There is a sense of fantastic relief at the Russian parliamentary amnesty. [But] we know we have not won. We haven't stopped oil companies industrialising the Arctic. We need to go back there. We have to bear witness and show the risks [to the environment]," he said.
"We have to end the age of oil, step up the campaign on the alternatives. Ultimately we need to remove the market for oil and end the age of oil."
Just as the French intelligence services inadvertently helped Greenpeace's cause when its agents sank the Rainbow Warrior in 1984 to prevent the ship from interfering with a nuclear test, so the storming of the Arctic Sunrise by 15 federal security service officers had helped make the world far more aware of what oil companies are doing in the Arctic, he said.
"The Russians have shot themselves in the foot by massively raising the profile of the campaign. There is huge new awareness of what is happening. Millions more people now know. The political leaders from 18 countries [which had Arctic 30 campaigners] had to engage with Russia over it. The idea that these oil companies will go up to the Arctic now in secret is no longer the case."
The 21 judges sitting at the international tribunal for the law of the sea convention may have provided the knock-out blow, voting 19-2 in favour of Greenpeace last month. "The convention [on the law of the sea] is the same one that Russia has used to claim much of the Arctic. They could not be seen to accept some parts of it but not others," Sauven said.
The group intends to campaign more in Russia. "Russia has not been favourable to Greenpeace in the past. But we have had a lot of airtime in the last few months. The Russian public is much more aware. We have got to find ways to develop this and connect with the Russian public," he said.
"Half the oil spills in the world happen in Russia. But if you look at the opinion polls, people there want to protect the Arctic. People understand the history of the Soviet Union is one of environmental destruction."
He said the focus of Greenpeace's Arctic campaign may now switch to Shell, Exxon and other large oil companies planning to work in the Arctic. "Things are changing. Oil companies are beginning to see some of the risks. Investors are getting worried. Shell alone has spent billions and got nothing from it. It costs more and more to go to these hostile environments."
By mimi sato - December 19, 2013