Climate change policy at risk because of denial and fear, Ed Davey warns


Climate change policy at risk because of denial and fear, Ed Davey warns 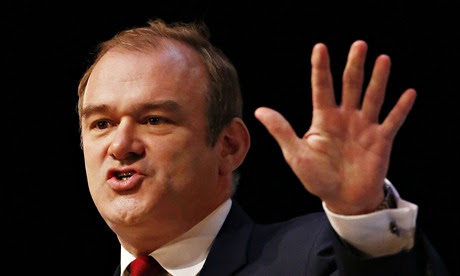 Ed Davey says 'climate change denying conservatism' could create a diabolical cocktail that threatens the structure of UK climate change and energy policy. Photograph: Danny Lawson/PA
Britain's climate change policy is under threat from a "diabolical cocktail" of nimbyism, denial of science and fear of Europe from politicians on the right, the energy secretary will say on Thursday.
Amid growing warnings about a potential link between global warming and extreme UK weather, Ed Davey will raise concerns that the politicial consensus about the need to tackle climate change is in danger of breaking down as some in the Conservative and Ukip parties try to discredit the science.
He will say that the actions of climate deniers are "undermining public trust in the scientific evidence for climate change" and that "we can see around us today the possible consequences of a world in which extreme weather events are much more likely".
In his speech at the IPPR thinktank on Thursday, Davey will criticise those who seize on "any anomaly in the climate data to attempt to discredit the whole".
Taking aim at "climate change denying Conservatism", which he calls wilfully ignorant, he warns that it could create a diabolical cocktail that threatens the whole long-term structure of UK climate change and energy policy.
The chief scientist at the Met Office, Dame Julia Slingo, said on Sunday that evidence suggests there is a link between the extreme weather gripping Britain and climate change. David Cameron has also said he suspects there is a connection.
However, the environment secretary, Owen Paterson, has repeatedly downplayed the risks of climate change, leading to calls from the Green party and environmental groups for him to be sacked.
On Wednesday, Lord Lawson a former Conservative chancellor who regularly casts doubt on climate science, also criticised suggestions of a link between the floods and global warming as absurd.
He said: "You'll see the Met Office's own report denies it. It is just this Julia Slingo woman who made this absurd statement, but their own official statement makes it clear there is no proven link whatsoever.
"There's been bad weather before. And anyhow, climate change is a global phenomenon, and you don't attribute local things like this necessarily to some global picture."
He joins the Ukip leader, Nigel Farage, in dismissing warnings of a link. Farage said the cause was "just the weather" when he toured the stricken town of Burrowbridge in Somerset.
The Met Office has said there can be no definitive conclusions that the floods are linked to climate change, but Slingo indicated there are signs of a connection.
On Sunday she said: "All the evidence suggests there is a link to climate change. There is no evidence to counter the basic premise that a warmer world will lead to more intense daily and hourly rain events."
The government has also been warned by the climate change committee about a £500m shortfall in funding for flood defences as the risk of extreme weather events is likely to increase.
Sunday's joint report from the Met Office and the Centre for Ecology and Hydrology, entitled The Recent Storms and Floods in the UK, points out that the 12cm (4.7in) rise in sea level over the 20th century has exacerbated coastal flooding. It says a further rise of between 11cm and 16cm is expected by 2030, two-thirds of which is attributable to the effects of climate change.
The report says the run of deep depressions from December to February is unusual, adding: "In terms of the storms and floods of winter 2013/14, it is not possible, yet, to give a definitive answer on whether climate change has been a contributor or not." Attributing specific weather events is painstaking work that requires time significant computing power.
The report states that daily heavy rainfall is now more frequent than in the 1960s and 1970s.
The authors write: "It is worth emphasising that there is no evidence to counter the basic premise that a warmer world will lead to more intense daily and hourly heavy rain events.
"In terms of the impacts of changing weather and climate patterns, the cluster of drought and flood events through the early years of the 21st century, and the recent runoff and recharge patterns, are near to the extreme range of historical variability."
By mimi sato - February 13, 2014