JAPANESE-BRAZILIANS DIALOGUES AND THE INSEPARABILITY OF ECOSYSTEM SERVICES

JAPANESE-BRAZILIANS DIALOGUES AND THE INSEPARABILITY OF ECOSYSTEM SERVICES: LESSONS LEARNED IN TRADITIONAL FESTIVALS OF AUTUMN IN JAPAN

This brief news reveal the preliminary results we have sought to establish between traditional knowledge and environmental sustainability. The Research Group on Environmental Education, Communication and the Arts at the Federal University of Mato Grosso - GPEA / UFMT in Brazil has conducted research on the intertwining of ecosystem services with the Pantanal’s Traditional Ecological Knowledge (TEK). In the second half of 2012, we extended our eyes to more distant horizons and we were have experienced our research in the lands of the rising sun, Japan. We opened the dialogue with farmers’ Noto Jima (Noto Island), a small island in the Bay of the Noto Peninsula, Ishikawa’s province, in the central-west of the Japanese archipelago, surrounded by Sea or the West Sea Japan, and we have identified an important Cultural Ecosystem Services in evidence, the Akimatsuri - traditional festivals fall.

Akimatsuri - traditional festivals are celebrated on autumn by farming communities in Japan, therefore, happen in almost any Japanese territory at the end of the rice harvest. The festivals are Shinto rituals of thanksgiving and celebration of the good harvest, plenty and prosperity achieved in the community, at which each family joins its members to demonstrate their gratitude that is expressed in abundant distribution offerings to the gods and to fellow banquet.

At festivals, we identified a core catalyst of meanings and values ​​cultivated over thousands of years: the rice. This cereal founded a centre aggregator and developer of the intrinsic relationship between the different types of ecosystem services. Rice is the staple food of the Japanese and their culture is an indispensable tradition in Japanese lands, their culture connotes next to the sacred (BUBER, 1985) and not by chance, this tiny and vital grain to the life of these people, constitutes itself, a supporting ecosystem service, a provisioning food, regulating plant and cultural symbol.

The Case Study (the festivals fall on the Isle of Noto) was conducted through interviews, observation and dialogue with its inhabitants reaffirmed the hypothesis that it is no longer possible to understand the world and the environmental crisis if we continue to fragment our search (GASKEEL, 2002). In this context, we have learned that urges to find the interconnection phenomena. The ritual of the autumn festival in Japan, as well as the traditional festivals in the wetland in Brazil, reveal traditional knowledge and practices that add complexity in the local culture, respect for the territory and they are symbols of a gift to the own lands.

In Japan, rice is the cornerstone celebration of autumn, it fulfils its role of regulating and support from their own cultivation in traditional ways because of the terraced rice fields provide the maintenance of ecosystem health, as well as conservation biodiversity during the four seasons (figure 1). At the same time, it is provision service and cultural expression in the obligatory presence of thanks and appreciated delicacy of different preparation methods, banquet that satisfies body and soul of the community members. 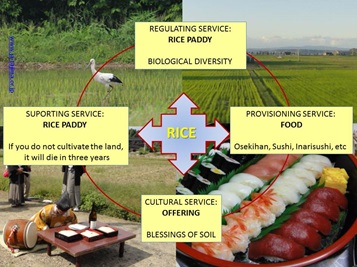 
Rice is, therefore, an essential grain to agriculture, economics, health and culture of the region, linking ecosystem services and making sure the inseparability between culture and nature - and between ecosystems and festivities. 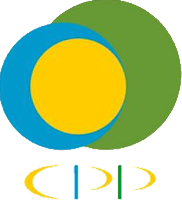