A lavish celebration of the intersection of art, science, and technology. 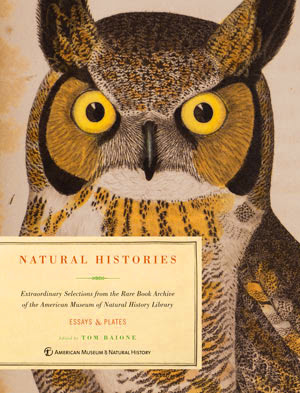 Natural Histories: Extraordinary Rare Book Selections from the American Museum of Natural History Library (public library) brings together an extraordinary collection of works from the Rare Book Room and Rare Book Collections of the American Museum of Natural History’s Research Library, spanning five centuries of anthropology, astronomy, earth science, paleontology, and zoology representing all seven continents. Each highlighted work is accompanied by a short essay exploring its significance, what makes it rare — scarcity, uniqueness, age, binding type, size, value, or nature of the illustrations — and its place in natural history. 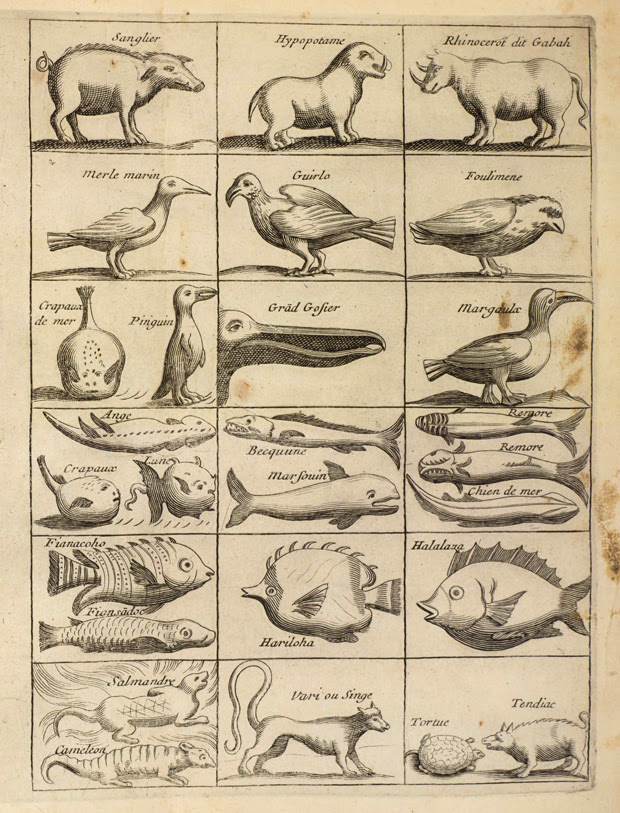 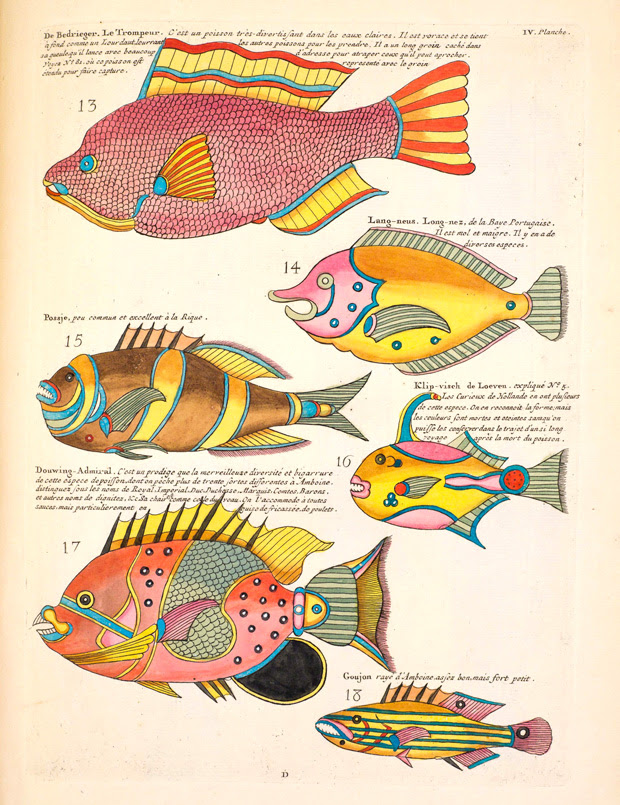 Louis Renard (1678-1746)
Although there are many coloration and anatomical errors in these drawings, many of the specimens depicted can be identified as actual animals. In this plate, all the specimens can be identified to genus, and some even to species.
Tom Baione, who oversees AMNH’s library and who edited the collection, notes in the introduction:

The stories behind the works selected, these natural histories, not only tell the story of the history of science and art over the last five hundred years, but also of the advances and revelations of science and technology during the age of print. While still tools for science, these works endure as small monuments to the achievements and struggles involved in the study of natural science over the centuries. Louis Renard (1678-1746)
Some of the specimens are described by their edibility and are accompanied by recipes. For example, the bliangh (bandfish) is described as 'very good but full of bones and very hairy. The chinese like it very much when steamed with garlic and pepper.' 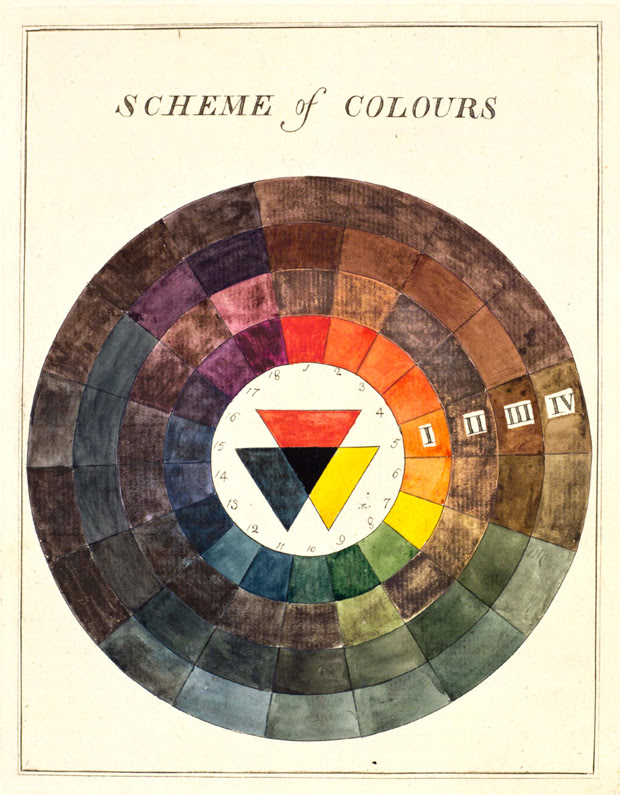 Moses Harris (1731-1785)
Color wheel from Exposition, 1782. A hand-painted version of the Harris color wheel (the modern color wheel).
(For a related treat, see Goethe’s theory of colors.)
What makes many of these illustrations particularly fascinating is that they represent a brief slice of history in the evolution of visual representation — after the advent of photography in the early 20th century, many of these lavish artistic illustrations were supplanted by photographic images, which shifted science to a much more aesthetically sterile approach to describing and depicting species. They’re also a heartening and enduring example of the magic that lies at the intersection of art and science as scientists not only sought out the best artists to illustrate their articles, but also versed themselves in drawing and produced exquisite artworks of their own. 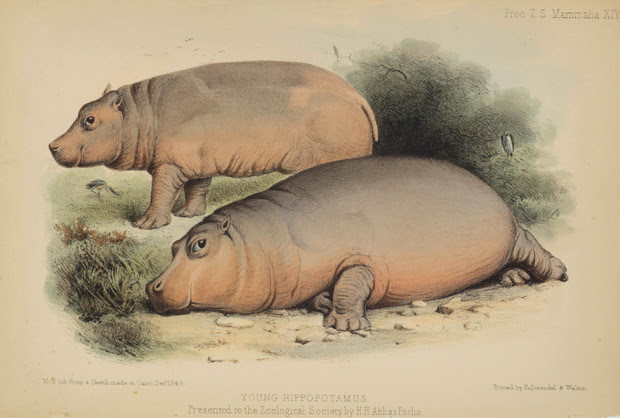 Proceedings of the Zoological Society of London
The young hippopotamus Obayasch (1849-1878) in the Cairo garden of the British Consulate, awaiting transportation to the London Zoo. The consul, Mr. Murray, described the hippo as being as playful as a Newfoundland puppy. Joseph Wolf, the Zoological Society's principal artist, painted the charming youngster from a sketch. 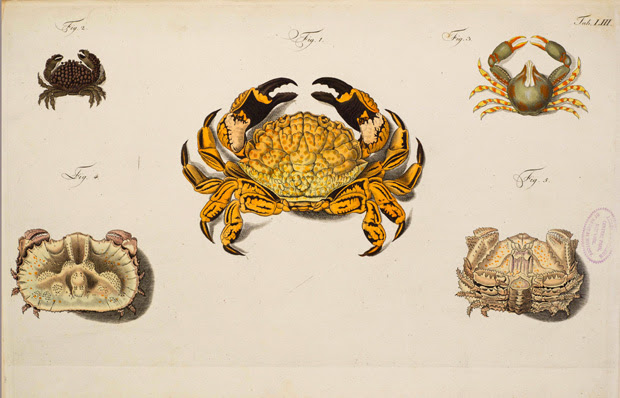 Johann Friedrich Wilhelm Herbst (1743-1807)
Zosimus aeneus (Linnaeus, 1758) (Cancer amphitrite, Herbst, 1801). Widely distributed throughout the Indo Pacific and common on reef flats, both its shell and meat contain neurotoxins and its poison can be fatal. 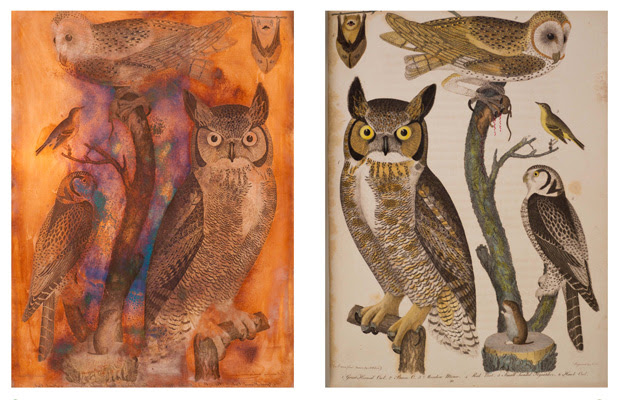 Alexander Wilson (1766-1813)
'Owl Copper.' The engraver Alexander Lawson transferred Wilson's drawings to copper plates, which were then printed and hand colored by artists. 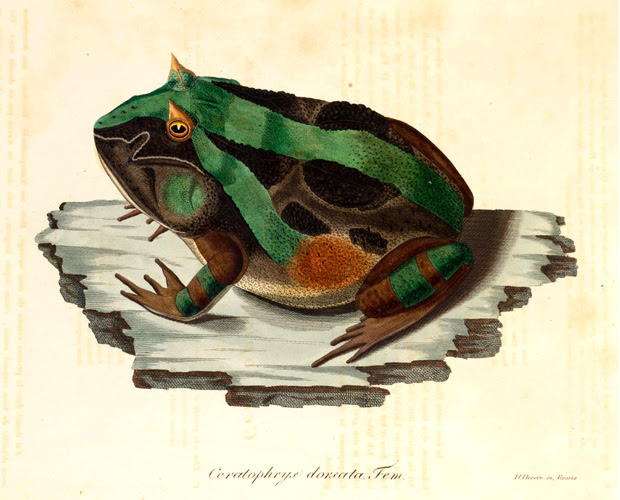 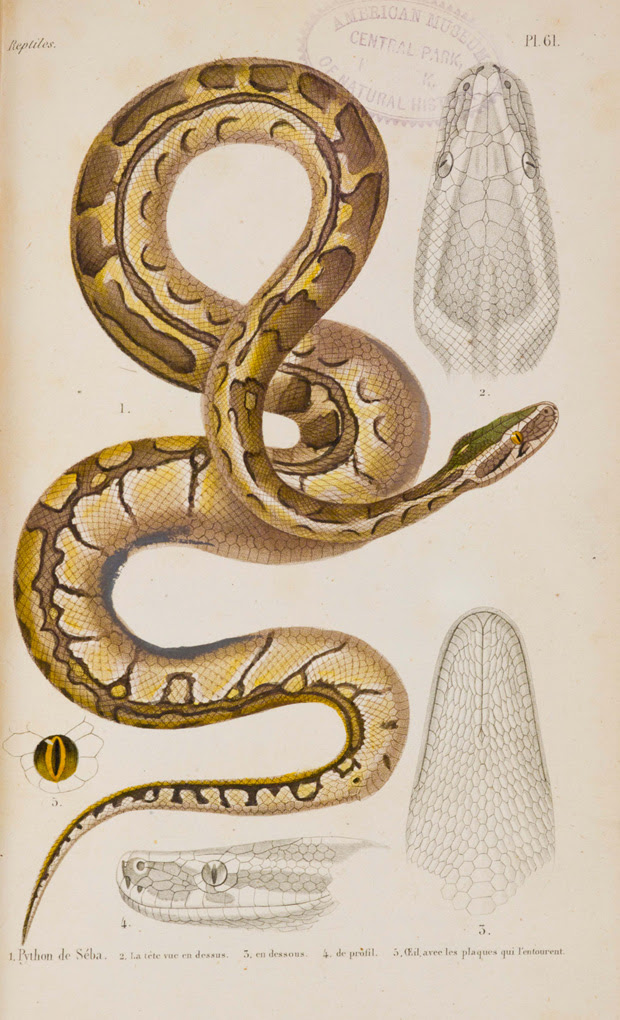 André-Marie-Constant Duméril (1774-1860), Gabriel Bibron (1806-1848), and Auguste Henri André Duméril (1812-1870)
The Python sebae (African rock python) is Africa's largest snake, with specimens reported to exceed 20 feet. This species is often an ambush feeder, striking and holding its prey with its jaws and then killing it by suffocation using its powerful body muscles to constrict. Prey include rodents, monkeys, antelopes, monitor lizards, and even crocodiles. 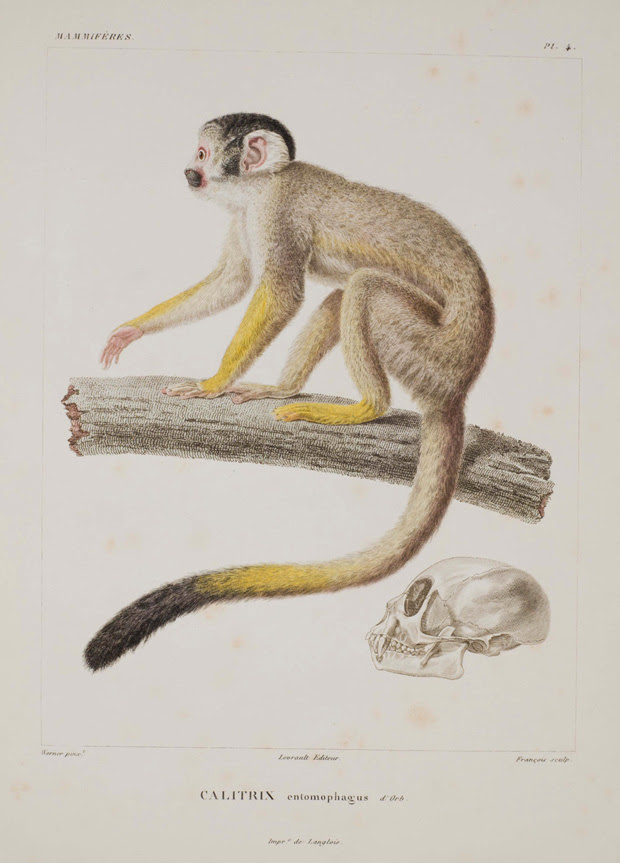 Aleide Dessalines d'Orbigny (1802-1857)
D'Orbingy saved the mammal section of the book for last, but other work overwhelmed him and the mammal descriptions went very brief. The black0capped squirrel monkey seen here is found in Bolivia, where it lives in large groups and subsists mainly on arthropods. 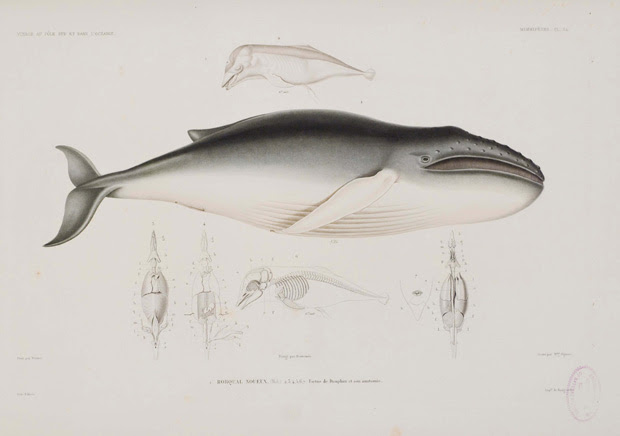 Jules-Sébastien-César Dumont d'Urville (1790-1842)
'Humpback Whale (Megaptera novaeangliae).' Voyages of exploration almost always had a commercial side, and the French and British alike were interested in developing sealing and whaling in the southern ocean. By the 1840s, slow, easily hunted species like right whales had become rare, and whalers were turning to other prey such as humpbacks. 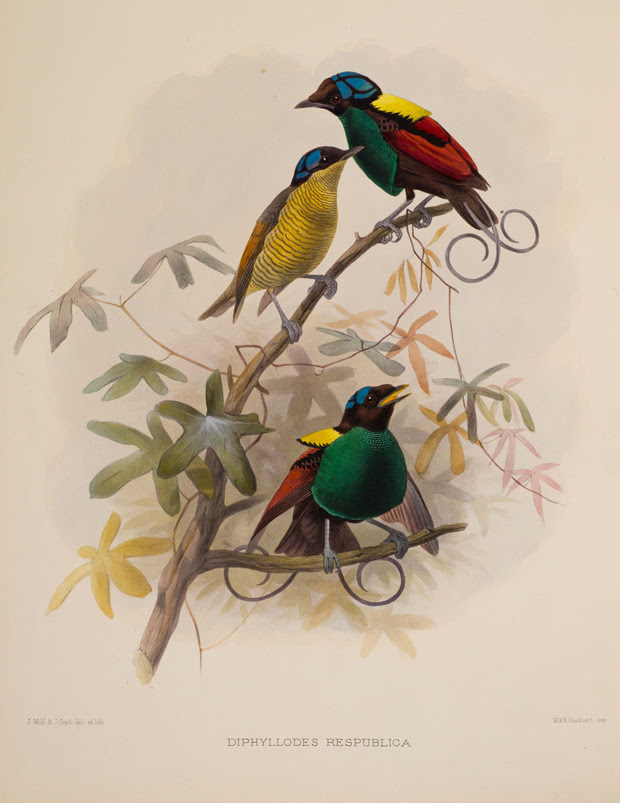 Daniel Giraud Elliot (1835-1915)
This species, Diphyllodes respublica, is restricted to two small islands, Waigeo and Batanta, west of mainland New Guinea. Both sexes have blue bare skin on their crown. In the nineteenth century artists had little information about mating behavior of birds of paradise, and the poses depicted are incorrect. instead, the male displays on small vertical branches near the ground.
Baione writes of Ernst Haeckel’s remarkable illustrations:

The most striking element of Haeckel’s illustrations inKunstformen der Natur is the startling arrangement of the life forms depicted — especially the microscopic subjects. it appears almost as if some unseen magnetic force had aligned them and arranged each in perfect position for viewing. This maximized the real estate on the paper and allowed the greatest number of related organisms to be studied and admired. While the result was artistic, the intention was educational and scientific. For Haeckel, illustrating and sharing his observations was a way to convey knowledge and information about the natural world. While some scientists observed and described connections between similar forms and functions to show relatedness between animals, Haeckel’s vision and documentary skills went a step further, illustrating similar creatures together, so that anyone — scientists or not — could clearly see their relatedness. As a fervent believer in Darwinian evolutionary theory, he merely pointed out to his viewers the logic of the theory by providing them with a view by which they could see the obvious connections for themselves. 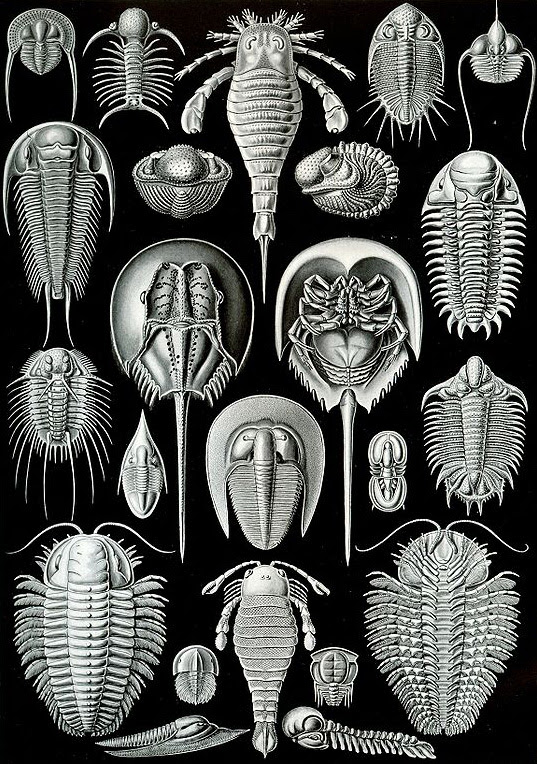 Ernst Haeckel (1834-1919), Kunstformen der Natur (Art Forms of Nature)
Haeckel labeled these organisms 'Aspidonia,' a name no longer used. The grouping here includes members of the classes Merostomata and Trilobita. Most of these organisms are long extinct, except for those belonging to the class Merostomata, which includes the horseshoe crab. 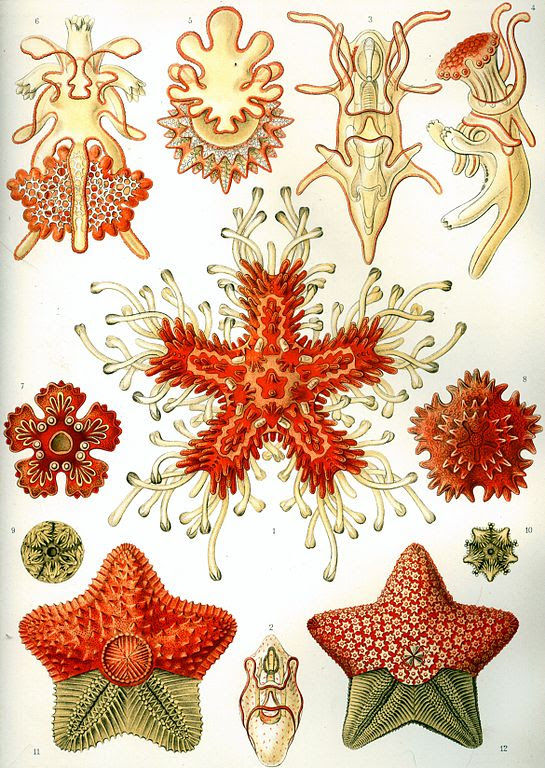 Ernst Haeckel (1834-1919), Kunstformen der Natur (Art Forms of Nature)
Asteridea is the subclass of echinoderms that includes the sea stars. While slow moving, they are high-level predators and feed on other invertebrates, including mollusks and barnacles.
The book comes in a beautiful slip-case containing 40 stunning, frame-ready prints: 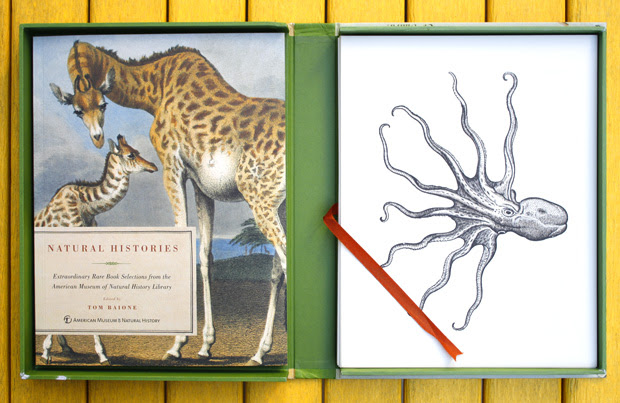 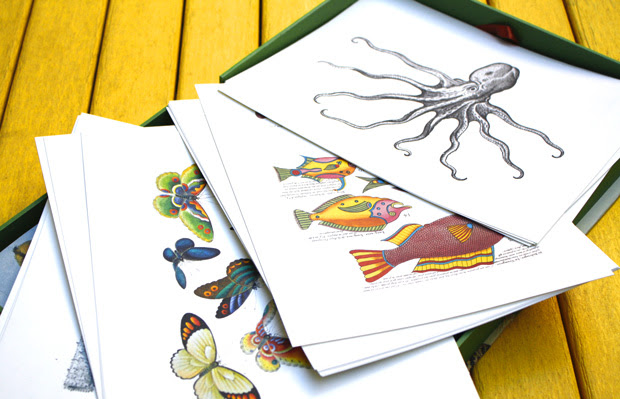 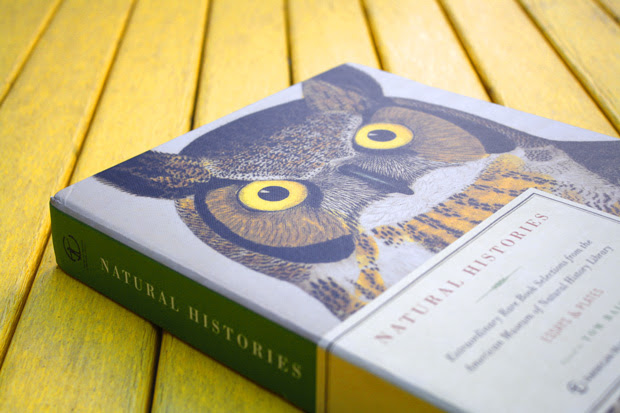 Thoughtfully curated and lavishly produced, Natural Histories is the finest celebration of natural history since A Glorious Enterprise.
By mimi sato - July 29, 2014