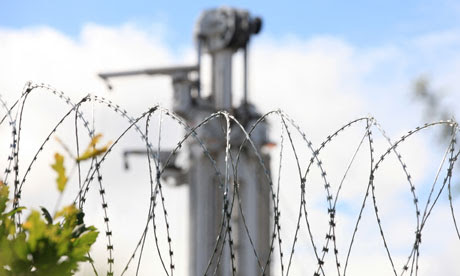 Cuadrilla has doubled the height of its security fences and installed razor wire at its Balcombe site. Photograph: Wpa Pool/Getty Images
Yesterday Jacob Rees-Mogg, member of parliament for North East Somerset, wrote an article in the Telegraph claiming that the fundamental cause of the UK's "high energy prices" is "climate changealarmism." His piece coincided with Prime Minister David Cameron'sannouncement that to tackle rocketing gas and electricity bills he would "roll back" green levies on energy bills and subject Britain's "Big Six" energy giants to a "competition test."
Even the Tory's own lead environmentalist MP, Zac Goldsmith, was appalled. "In 2010, leaders fought to prove they were the greenest", he said. "Three years on, they're desperately blaming their own policies on the other. Muppets."
But Rees-Mogg's piece illustrates the insidious nature of the anti-environment economic ideology that has been so influential in the Tory party, and that has derailed the potential for meaningful environmental policy. Energy companies have announced prices rises against the background of government regulation and "green taxes", he writes, because concern over climate change has led to unjustifiable opposition to coal and fracking:

"In the 2010s it is not the price of bread that is falsely and unnecessarily inflated by obstinate politicians but that of energy. There are cheap sources of energy either available or possible but there is a reluctance to use them. Coal is plentiful and provides the least expensive electricity per megawatt, while fracking may provide a boon of shale gas."

He is wrong on both counts - laughably so. A number of recent scientific studies in major journals such as Fuel, Energy, the International Journal of Coal Geology - to name just a few - have projected that a peak in world coal production is only a few years away, followed by production declines and spiraling prices.
As for fracking, its capacity to provide cheap shale gas has beenquestioned by leading independent experts who point to steep production declines at wells, along with overinflated industry reserve estimates that have led to a "bubble" that could burst in the next five years.
At the core of Rees-Mogg's obfuscation on energy is an ideology that paints corporations as the key to prosperity for all:

"As the Government has made the price higher so the energy companies put a margin on top. High prices are almost expected."

But this is also false. The fundamental cause of the high energy prices consistently dampening prospects for economic growth is the peak and plateauing of cheap conventional oil production since around 2005, which has ramped up oil prices and compelled a deepening dependence on increasingly expensive unconventional sources like tar sands, oil shale and shale gas. This is not particularly controversial - even Shell's CEO has warned that shale gas will not reduce prices, and evidence submitted to the House of Lords Economic Affairs Committee by Bloomberg New Energy Finance shows that shale gas "will not be a panacea for bringing down gas and electricity bills" as costs will be "50% to 100% higher than in the US."
Rees-Mogg then flirts unabashedly with climate denialism, arguing that the effect of carbon dioxide emissions on the climate "remains much debated", and that climate models are inaccurate because it was "computer modelling" that led to the 2008 global banking collapse of 2008. Notwithstanding the obvious fact that climate models are completely different from the quantitative models that justified the reckless debt-expansion behind the global financial crisis, the former are only inaccurate in being too conservative - whereas the latter wererigged by financiers to maximise profits at taxpayer's expense.
Rees-Mogg's other case for inaction is that we are not responsible for climate change. Britain emits only "2 per cent" of the world's CO2. What he ignores here is that the UK is still in the top ten of global emitters - and that if every country decided on inaction because it only contributes by itself a small percentage of emissions, then what we have is a recipe for abject failure.
Rees-Mogg would have us believe he is motivated by the plight of the poor, whom he says are "most particularly" punished as a "matter of choice not of necessity.... This can be stopped by ending the environmentalist obsession and delivering cheap energy." But one might be forgiven for concluding that his real concern is corporate profiteering. The solution to high energy prices, he says, is "to free the market" - the same "free" market that led to the 2008 crash, the Eurozone crisis, and so on - "not to control prices which will simply reduce supply."
This is hardly surprising. Rees-Mogg is a founding partner at Somerset Capital Management (SCM), a global asset management fund where hecurrently works as a macro specialist while also being an MP. Among its many investments, SCM specialises in emerging markets, including in the energy industry. Its largest holdings include oil majors such as the China National Offshore Oil Corporation (CNOOC) - which for instance is spearheading multibillion dollar deals to access the North American shale gas market - and Russia's OJSC Rosneft Oil Company.
According to its interim report published in March this year, the fund pulled out of some energy projects on the basis of declining rates of profitability "due to the rising cost of production", but viewed CNOOC's recent ventures to exploit US fracking as "favourable." In other markets such as India, China and Brazil, economic prospects were mixed as "both domestic consumption and exports put in lacklustre performances." The overall assessment was uncertain, with the report noting that emerging market economies are "cooling", and that "The market has periodic rallies but these show no real conviction."
While Rees-Mogg's firm profits from fracking abroad, Rees-Mogg himself uses his own parliamentary privilege to advocate fracking at home, while promoting a kind of free market extremism. In a speech last month during a Private Member's Bill proposing amendments to the Deep Sea Mining (Temporary Provisions) Act 1981, Rees-Mogg reportedly urged forgreater deregulation to permit British companies to explore the potential for off-shore and deep sea resources:

"That's what this is really about: exploring these resources that could add to the wealth not only of the nation but of the globe at large; because as we've seen the emergence of the new economies - China, India, Brazil and of Russia - so we have seen demand for resources grow extraordinarily."

"I would urge the Bill to have a more deregulatory ambition within it", he added.

"It's obviously wise to extend it purely for metals to include gas and to include liquids, because there may be all sorts of exciting things at the depths of the sea. There may be endless supplies of gas, there may be oils spurting out as if Saudi Arabia is on the seabed."

Ironically, these are precisely the sorts of policies that could indirectly benefit corporate players like Somerset Capital Management, its holdings, and its clients in emerging markets and beyond. Indeed, SCM's own indifference to environmental challenges is plainly stated on its website, where it declares:

"... we makes [sic] no claim to using environmental, social and governance concerns as tenets of ethics in the fashioning of investment returns."

That might be all quite acceptable in its own context, but when this cavalier attitude becomes evident in public advocacy by our so-called political representatives, it's time to start asking questions about the extent to which politics is being hijacked in the name of unaccountable corporate power.
Dr Nafeez Ahmed is executive director of the Institute for Policy Research & Development and author of A User's Guide to the Crisis of Civilisation: And How to Save It among other books. Follow him on Twitter@nafeezahmed
By mimi sato - October 24, 2013