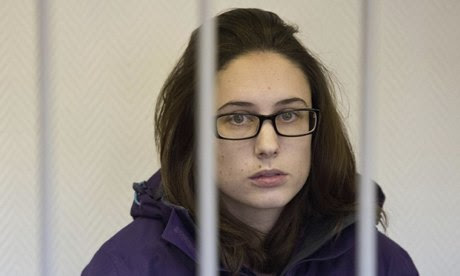 Alexandra Harris, a British Greenpeace activist imprisoned by the Russians. Photograph: Dmitri Sharomov/AP
Russian investigators announced on Wednesday they are dropping piracy charges against 28 environmental activists and two freelance journalists who have spent a month in custody since they were seized aboard Greenpeace's boat, the Arctic Sunrise.
All 30 will still be charged with hooliganism as part of an organised group, which carries a potential jail sentence of up to seven years, as opposed to 15 years for piracy. Some of them may also face other tougher charges of endangering the lives of Russian officials.
"The Arctic 30 are no more hooligans than they were pirates," said Vladimir Chuprov of Greenpeace Russia. "This is still a wildly disproportionate charge that carries up to seven years in jail. It represents nothing less than an assault on the very principle of peacefulprotest."
The 30 have been in prison since Russian coastguards stormed the Arctic Sunrise in mid-September as Greenpeace activists protested against the Prirazlomnaya oil rig, an offshore platform in the Pechora Sea operated by Russia's energy giant Gazprom.
The ship was towed back to the Arctic port of Murmansk, where the activists have been held in pre-trial detention centres ever since. In the past fortnight, judges have systematically rejected bail requests for the activists.
There are six Britons among the detainees, including 27-year-old Alexandra Harris, who wrote to her parents that she felt like she was "slowly dying" in her cell, in an emotional letter seen by the Guardian.
Cliff Harris, Alexandra's father, said yesterday: "My initial reaction is a bit of relief, really, that the charge is a much lesser charge, but not knowing the implications of that charge it's hard to know. But it's got to be a move in the right direction to bring an end to the sad internment of my daughter."
After finding out that the new charges carry a maximum penalty of seven years' imprisonment,
Sue Turner, the mother of Iain Rogers, a member of the Arctic Sunrise crew from Exeter, said: "My son is not a pirate and he's not a hooligan. It's a little bit worrying, but at least they're talking to each other."
The piracy charges have been broadly derided as having little basis in Russian law, partly as it is fairly clear to all involved that Greenpeace's intentions were never to steal or seize property from the Prirazlomnaya rig. Bail hearings have also involved protracted discussions that often descended into absurdity over whether Prirazlomnaya is a vessel or not – another necessary condition for piracy charges to stand.
Vladimir Markin, the chief spokesman for Russia's Investigative Committee, suggested yesterday that it was the stubbornness of activists in refusing to co-operate with Russian investigators that had led to the piracy charges: "The refusal of the accused to give testimony means that authorities need to check carefully all possible versions of what happened, including seizure of the platform with commercial intentions, terrorism, carrying out illegal scientific work and espionage."
He said that all 30 of the detainees would be recharged with hooliganism.
Russia's hooliganism laws cover a broad range of incidents. Members of the punk group Pussy Riot were convicted of "hooliganism motivated by religious hatred" and sentenced to two years in prison.
The Greenpeace activists look set to be charged with a clause of the hooliganism law that covers actions carried out by an organised group and has a maximum charge of seven years. Markin said any suggestion that the activists might simply be let off with a slap on the wrist is absurd: "According to the norms of international law, any person commits a crime if they illegally and deliberately seize a stationary platform, or take control of it, irregardless of their intentions," said Markin's statement. "It is clear that it is simply impossible to talk of a 'peaceful' protest in this particular situation."
Markin said that investigations were ongoing and that certain activists who resisted arrest may be charged with the more serious charge of endangering the lives of officials. He made no mention earlier allegation that illegal narcotics had been found aboard the boat. Greenpeace said it would continue to fight all the charges robustly.
"Those brave men and women went to the Arctic armed with nothing more than a desire to shine a light on a reckless business," said Chuprov. "They should be with their families, not in a prison in Murmansk."
By mimi sato - October 25, 2013