The Earth’s Shell Has Cracked, and We’re Drifting on the Pieces

The Earth’s Shell Has Cracked, and We’re Drifting on the Pieces

Plate tectonics helped make our planet stable and habitable. But slow peregrination of continents is still a mysterious process.
By Natalie Angier
The theory of plate tectonics is one of the great scientific advances of our age, right up there with Darwin’s theory of evolution and Einstein’s theory of relativity.
The idea that Earth’s outer shell is broken up into giant puzzle pieces, or plates, all gliding atop a kind of conveyor belt of hot, weak rock — here rising up from the underlying mantle, there plunging back into it — explains much about the structure and behavior of our home planet: the mountains and ocean canyons, the earthquakes and volcanoes, the very composition of the air we breathe.
Yet success is no guarantee against a midlife crisis, and so it is that half a century after the basic mechanisms of plate tectonics were first elucidated, geologists are confronting surprising gaps in their understanding of a concept that is truly the bedrock of their profession.
They are sparring over when, exactly, the whole movable plate system began. Is it nearly as ancient as the planet itself — that is, roughly 4.5 billion years old — or a youthful one billion years, or somewhere in between?
They are asking what caused the shell to crack apart in the first place, and how the industrious recycling of Earth’s crust began.
They are comparing Earth with its sister planet, Venus. The two worlds are roughly the same size and built of similar rocky material, yet Earth has plate tectonics and Venus does not.

Scientists want to know why. 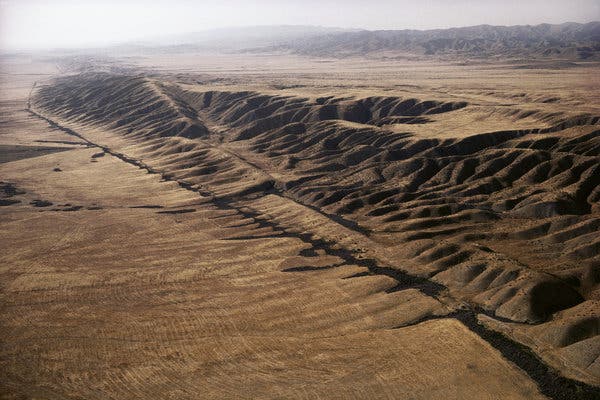 Image
Researchers also are exploring the link between plate tectonics and the evolution of complex life. Fortuitously timed continental collisions and mountain smackdowns may well have supplied crucial nutrients at key moments of biological inventiveness, like the legendary Cambrian explosion of 500 million years ago, when the ancestors of modern life-forms appeared.
“The connection between deep Earth processes and Earth surface biology hasn’t been thought about too clearly in the past, but that’s changing fast,” said Aubrey Zerkle, a geochemist at the University of St. Andrews in Scotland.
It’s increasingly obvious that “you need plate tectonics to sustain life,” Dr. Zerkle added. “If there wasn’t a way of recycling material between mantle and crust, all these elements that are crucial to life, like carbon, nitrogen, phosphorus and oxygen, would get tied up in rocks and stay there.”
The origin and implications of plate tectonics were the subject of a recent meeting and themed issue of Philosophical Transactions of the Royal Society.
Researchers said that pinning down when and how Earth’s vivid geological machinations arose will do more than flesh out our understanding of our home base. The answers could well guide our search for life and habitable planets beyond the solar system.
Robert Stern, a geoscientist at the University of Texas at Dallas, argues that if we’re looking for another planet to colonize, we want to avoid ones with signs of plate tectonic activity. Those are the places where life is likely to have evolved beyond the “single cell or worm stage, and we don’t want to fight another technological civilization for their planet.”

“A relatively benign way for the Earth to lose heat”

The idea that continents are not fixed but rather peregrinate around the globe dates back several centuries, when mapmakers began noticing the complementarity of various land masses — for example, the way the northeast bulge of South America looks as though it could fit snugly in the cupped palm of the southwest coast of Africa.
But it wasn’t until the mid-twentieth century that the generic notion of “continental drift” was transformed into a full-bodied theory, complete with evidence of a subterranean engine driving these continental odysseys.
Geologists determined that Earth’s outer layer is broken into eight or nine large segments and five or six smaller ones, a mix of relatively thin, dense oceanic plates riding low and thicker, lighter continental plates bobbing high.
At large fissures on the ocean floor, melting rock from the underlying mantle rises up, adding to the oceanic plates. At other fracture points in the crust, oceanic plates are diving back inside, or subducting, their mass devoured in the mantle’s hot belly.
The high-riding continental plates are likewise jostled by the magmatic activity below, skating around at an average pace of one or two inches a year, sometimes crashing together to form, say, the Himalayan mountain chain, or pulling apart at Africa’s Great Rift Valley.
All this convective bubbling up and recycling between crust and mantle, this creative destruction and reconstruction of parts — “tectonic” comes from the Greek word for build — is Earth’s way of following the second law of thermodynamics. The movement shakes off into the frigidity of space the vast internal heat that the planet has stored since its violent formation.
And while shifting, crumbling plates may seem inherently unreliable, a poor foundation on which to raise a family, the end result is a surprising degree of stability. “Plate tectonics is a relatively benign way for Earth to lose heat,” said Peter Cawood, an Earth scientist at Monash University in Australia.
“You get what are catastrophic events in localized areas, in earthquakes and tsunamis,” he added. “But the mechanism allows Earth to maintain a stabler and more benign environment overall.”

We’ll bring you stories that capture the wonders of the human body, nature and the cosmos.
Sulfuric gas in the Afar Triple Junction in Ethiopia, at the top of the Great Rift Valley. Three tectonic plates meet at this spot: the Arabian plate and two African plates, Nubian and Somali.CreditMassimo Rumi/Barcroft Media, via Getty Images 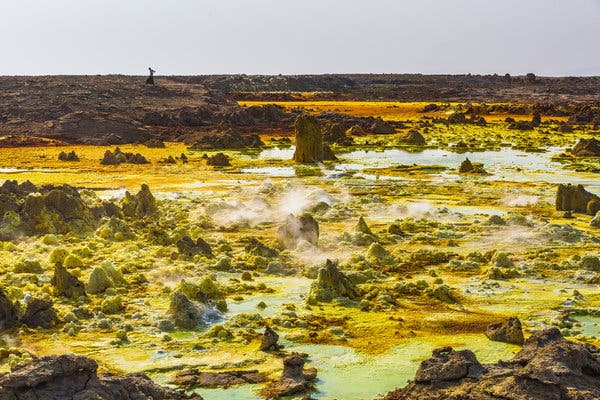 Unfortunately for geologists, the very nature of plate tectonics obscures its biography. Oceanic crust, where the telltale mantle exchange zones are located, is recycled through the upwelling and subducting pipeline every 200 million years or so, which means hard evidence of tectonic origins was destroyed long ago.
Continental crust is older, and rocks dating back more than 4 billion years have been identified in places like Jack Hills, Australia. But continental plates float above the subductive fray, revealing little of the system’s origins.
Nevertheless, geoscientists are doing their best with extant rocks, models and laboratory experiments to sketch out possible tectonic timelines. Dr. Korenaga and his colleagues have proposed that plate tectonics began very early, right after Earth’s crust solidified from its initial magmatic state.
[Like the Science Times page on Facebook. | Sign up for the Science Times newsletter.]
“That is when the conditions would have been easiest for plate tectonics to get started,” he said. At that point, he said, most of the water on Earth — delivered by comets — would still be on the surface, with little of it having found its way into the mantle. The heat convecting up through the mantle would exert a stronger force on dry rocks than on rocks that were lubricated.
At the same time, the surface water would make it easier for the hot, twisting rocks beneath to crack the surface lid apart, rather as a sprinkling of water from the faucet eases the task of popping ice cubes from a tray. The cracking open of the surface lid, Dr. Korenaga said, is key to getting the all-mighty subduction engine started. With subduction established, water, like oceanic crust, would cycle between Earth’s surface and mantle.

Water is constantly recycled between the mantle and crust 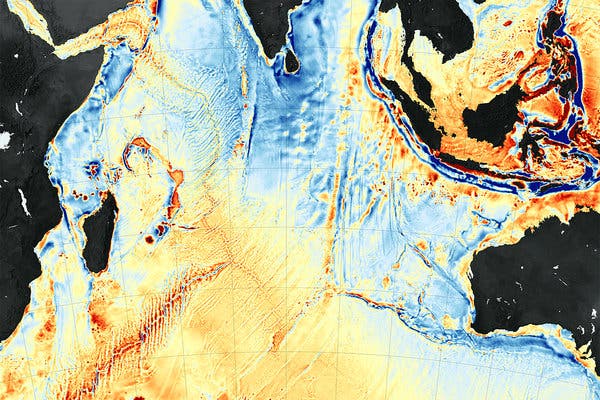 On the opposite end of the origins debate is Dr. Stern, who argues that plate tectonics is a mere billion years old or less, and that Earth spent its first 3.5 billion years with a simple “single lid” as its outer shell: a crust riddled with volcanoes and other means of heat ventilation, but no moving plates, no subduction, no recycling between inside and out.
As evidence of the youthfulness of the plate regimen, Dr. Stern points to two classes of rocks: ophiolites and blueschist.
Ophiolites are pieces of oceanic crust atop bits of underlying mantle that have made their way onto land and thus have escaped the relentless recycling of oceanic crust. Recent research has shown that ophiolites are not just any slice of oceanic crust, Dr. Stern said, but rather were formed by the forces of subduction.
Similarly, blueschists are rocks that are fashioned under very high pressure but low temperatures, and “the only place you can do that is in a subduction zone,” Dr. Stern said.
Nearly all ophiolites are less than a billion years old, he added, while the most ancient blueschists, found in China, are just 800 million years old. No ophiolites, no blueschists, no evidence of subduction or plate tectonics.
Most geologists opt for a middle ground. “Science is a democratic process,” said Michael Brown, a geologist at the University of Maryland and an editor of the themed issue, “and the prevailing view is that Earth started to exhibit behaviors that look like plate tectonics 2.5 to 3 billion years ago.”
Significantly, that chronology decouples plate tectonics from the origin of life on Earth: evidence of the earliest single-celled organisms dates back more than 3.6 billion years. Nevertheless, scientists view plate tectonics as vital to the sustained evolution of that primordial life.
In Iceland, a visible fault between the North American and Eurasian plates, which are pulling away from each other at a rate of about an inch a year.CreditUniversal History Archive/UIG, via 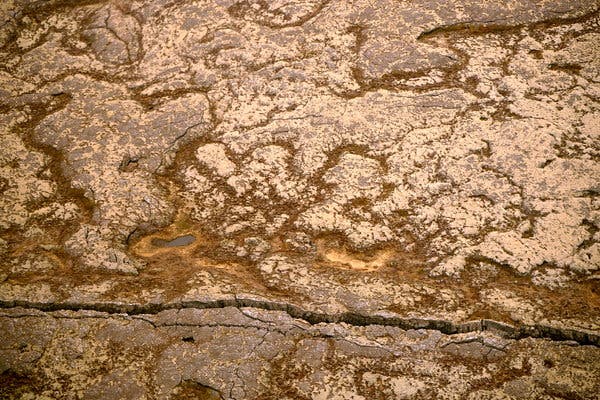 Plate tectonic activity did not just help to stabilize Earth’s heat management system. The movement kept a steady supply of water shuttling between mantle and crust, rather than gradually evaporating from the surface.
It blocked the dangerous buildup of greenhouse gases in the atmosphere by sucking excess carbon from the ocean and subducting it underground. It shook up mountains and pulverized rocks, freeing up essential minerals and nutrients like phosphorus, oxygen and nitrogen for use in the growing carnival of life.
Dr. Zerkle discerns a link between geological and biological high drama: “It’s been suggested that time periods of supercontinental cycles — when small continents smash together to make large supercontinents, and those supercontinents then rip apart into smaller continents again — could have put large pulses of nutrients into the biosphere and allowed organisms to really take off.”
Plate tectonics also built the right playing fields for Darwinian games.
“Think about what drives evolution,” Dr. Stern said. “It’s isolation and competition. You need to break continents and continental shelves apart, and separate one ocean from another, for speciation to occur.”