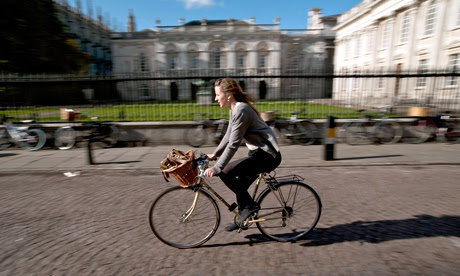 Cambridge University was ranked second-equal with Imperial, behind only the Massachusetts Institute of Technology. Photograph: Brian Harris/Alamy
Improvements in research have seen Cambridge University and Imperial College London surpass Harvard University in the latest authoritative annual ranking of the world's top universities, published on Tuesday, with four British institutions in the top six.
The QS ranking of world universities, regarded as the most rigorous of its type, places Imperial and Cambridge as second equal, behind only the Massachusetts Institute of Technology on the international stage in 2014, thanks to a year of impressive citations measured by QS's survey of academic output.
Harvard dropped from second to fourth overall. It was followed by Oxford and University College London in joint fifth place, with Stanford, Caltech, Princeton and Yale of the US filling out the rest of the top 10.
"These rankings support what our students, alumni, staff, friends and collaborators know, that Imperial is one of the world's great universities," said Professor Alice Gast, Imperial's new president of Imperial College and a leading chemical engineer. "Imperial has a rare ability to turn outstanding research into discoveries that have a real impact on the world."
Kings College London, Edinburgh, Bristol and Manchester universities are all in the top 30, capping the best performance by British institutions in the 10 years the QS rankings have been published. Glasgow, Warwick, Birmingham and Sheffield universities make the top 70. The 2014 rankings will also help British universities' efforts to attract research funding and recruit top-rate researchers and students.
Imperial College's jump from fifth to second place in a year was the result of recent world-leading output being more widely cited in academic journals and published research. Imperial pointed to research by theoretical physicist Professor Sir John Pendry, who this year won the Kavli prize in nanoscience for contributions to nano-optics, exploring how light behaves on a scale of one billionth of a metre, and work on manmade materials with unusual properties known as metamaterials.
"Rarely a day goes by when there isn't a new discovery or innovation from Imperial's talented staff, students and alumni," Gast said, paying tribute to the college's "entrepreneurial culture" and cooperation with academic and industry partners.
Ben Sowter, head of research at QS, said the top 10 had excellent academic reputations, graduate recruitment, staff-student ratios and international reach for faculty and students. "The performance of Imperial in citations per faculty has helped it become the biggest climber in the top 10, leapfrogging Harvard, UCL and Oxford to rank second equal in the world, tied with Cambridge," said Sowter.
Of the top 200 higher education institutions ranked by QS, the UK is represented by 29 and the US by 51, while Germany is the next best performer with 13. London has five in QS's top 100, compared with three for Boston and Hong Kong, and two for New York, Paris and Tokyo.
Graduates of Oxford and Cambridge were rated as the world's most employable, with LSE graduates also highly regarded. Cambridge was the best performing British institution for total research citations, an area heavily dominated by the more wealthy US universities.
"This ranking, like all the others, reflects the fact that the University of Cambridge is among a small group of the most respected and influential higher education institutions in the world," a university spokesperson said.
MIT in Boston retained top spot as the world's best university for the third year in a row, helped by another impressive rise in research citations.
• This article was amended on Tuesday 16 September 2014. The headline originally said that four British institutions ranked in the top five of the world's universities. It should have said four out of six. This has been corrected.
By mimi sato - September 16, 2014