What Does It Mean To Be Human? 300 Years of Defintions and Reflections


What Does It Mean To Be Human? 300 Years of Defintions and Reflections

What Aristotle has to do with the women’s suffrage movement, Darwin, and M. C. Escher. 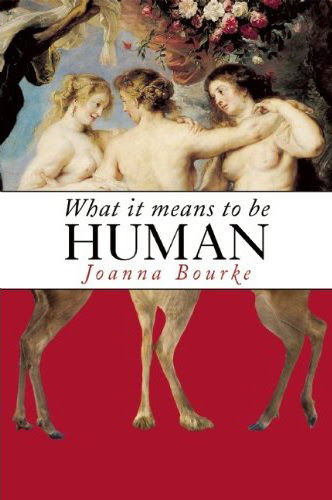 Last year, we explored what it means to be human from the perspectives of three different disciplines — philosophy, neuroscience, and evolutionary biology — and that omnibus went on to become one of the most-read articles inBrain Pickings history. But the question at its heart is among the most fundamental inquiries of existence, one that has puzzled, tormented, and inspired humanity for centuries. That is exactly what Joanna Bourke (of Fear: A Cultural History fame) explores in What It Means to Be Human: Historical Reflections from the 1800s to the Present.
Decades before women sought liberation in the bicycle or their biceps, a more rudimentary liberation was at stake. The book opens with a letter penned in 1872 by an anonymous author identified simply as “An Earnest Englishwoman,” a letter titled “Are Women Animals?” by the newspaper editor who printed it:

Sir, —
Whether women are the equals of men has been endlessly debated; whether they have souls has been a moot point; but can it be too much to ask [for a definitive acknowledgement that at least they are animals?… Many hon. members may object to the proposed Bill enacting that, in statutes respecting the suffrage, 'wherever words occur which import the masculine gender they shall be held to include women;' but could any object to the insertion of a clause in another Act that 'whenever the word "animal" occur it shall be held to include women?' Suffer me, thorough your columns, to appeal to our 650 [parliamentary] representatives, and ask — Is there not one among you then who will introduce such a motion? There would then be at least an equal interdict on wanton barbarity to cat, dog, or woman…
Yours respectfully,
AN EARNEST ENGLISHWOMAN

The broader question at the heart of the Earnest Englishwoman’s outrage, of course, isn’t merely about gender — “women” could have just as easily been any other marginalized group, from non-white Europeans to non-Westerners to even children, or a delegitimized majority-politically-treated-as-minority more appropriate to our time, such as the “99 percent.” The question, really, is what entitles one to humanness. 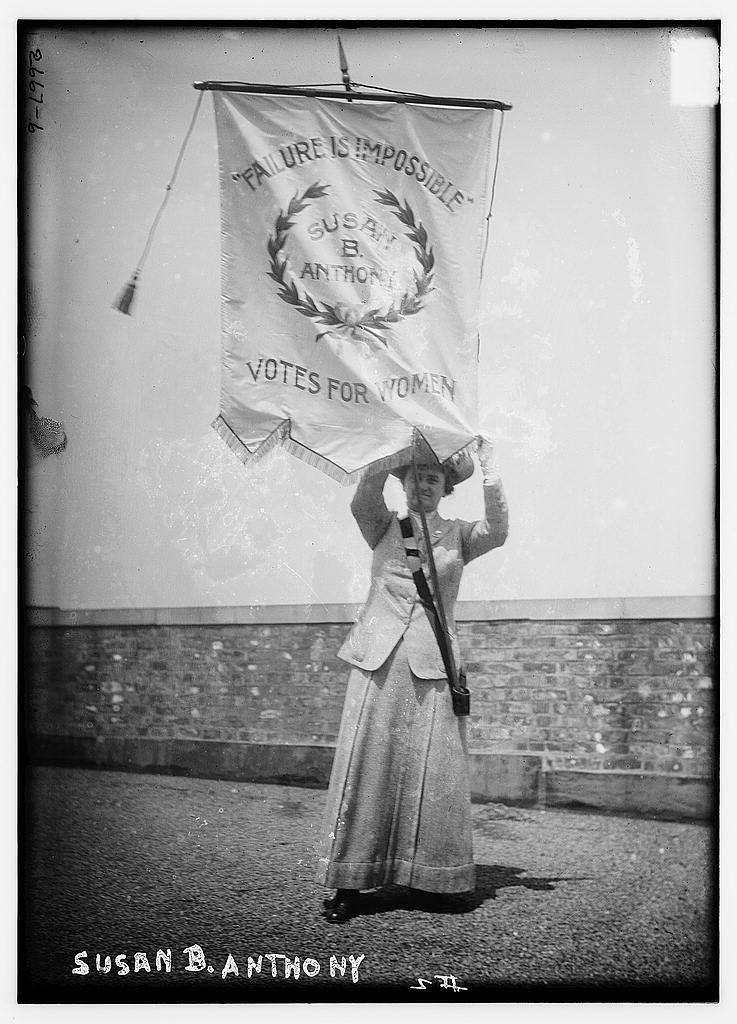 But seeking an answer in the ideology of humanism, Bourke is careful to point out, is hasty and incomplete:

The humanist insistence on an autonomous, willful human subject capable of acting independently in the world was based on a very particular type of human. Human civilization had been forged in the image of the male, white, well-off, educated human. Humanism installed only somehumans at the centre of the universe. It disparaged ‘the woman,’ ‘the subaltern’ and ‘the non-European’ even more than ‘the animal.’ As a result, it is hardly surprising that many of these groups rejected the idea of a universal and straightforward essence of ‘the human’, substituting something much more contingent, outward-facing and complex. To rephrase Simone de Beauvoir’s inspired conclusion about women, one is not born, but made, a human.

Bourke also admonishes against seeing the historical trend in paradigms about humanness as linear, as shifting “from the theological towards the rationalist and scientific” or “from humanist to post-humanist.” How, then, are we to examine the “porous boundary between the human and the animal”?

In complex and sometimes contradictory ways, the ideas, values and practices used to justify the sovereignty of a particular understanding of ‘the human’ over the rest of sentient life are what create society and social life. Perhaps the very concept of ‘culture’ is an attempt to differentiate ourselves from our ‘creatureliness,’ our fleshly vulnerability.

(Cue in 15 years of leading scientists’ meditations on “culture”.)
Bourke goes on to explore history’s varied definitions of what it means to be human, which have used a wide range of imperfect, incomplete criteria — intellectual ability, self-consciousness, private property, tool-making, language, the possession of a soul, and many more.
For Aristotle, writing in the 4th century B.C., it meant having a telos — an appropriate end or goal — and to belong to a polis where “man” could truly speak:

…the power of speech is intended to set forth the expedient and inexpedient, and therefore likewise the just and the unjust. And it is a characteristic of man that he alone has any sense of good and evil, or just and unjust, and the like, and the association of living beings who have this sense makes a family and a state.

Nature which acts in them according to the disposition of their organs, as one sees that a clock, which is made up of only wheels and springs can count the hours and measure time more exactly than we can with all our art.

For late 18th-century German philosopher Immanuel Kant, rationality was the litmus test for humanity, embedded in his categorical claim that the human being was “an animal endowed with the capacity of reason”:

[The human is] markedly distinguished from all other living beings by his technical predisposition for manipulating things (mechanically joined with consciousness), by hispragmatic predisposition (to use other human beings skillfully for his purposes), and by the moral predisposition in his being (to treat himself and others according to the principle of freedom under the laws.) 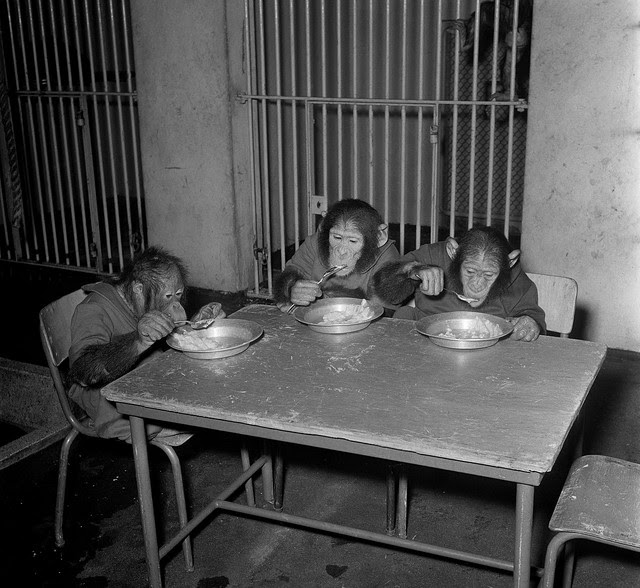 In The Descent of Man, Darwin reflected:

The difference in mind between man and the higher animals, great as it is, is certainly one of degree and not of kind. We have seen that the senses and intuitions, the various emotions and faculties, such as love, memory, attention, curiosity, imitation, reason, etc., of which man boasts, may be found in an incipient, or even sometimes in a well-developed condition, in the lower animals.

Deny reason to animals, and you must equally deny it to infants; affirm the existence of an immortal soul in your baby or yourself, and you must at least have the grace to allow something of the kind to your dog.

None of the traits by which the most authorized philosophy or culture has thought it possible to recognize this ‘proper of man’ — none of them is, in all rigor, the exclusive reserve of what we humans call human. Either because some animals also possess such traits, or because man does not possess it as surely as is claimed. 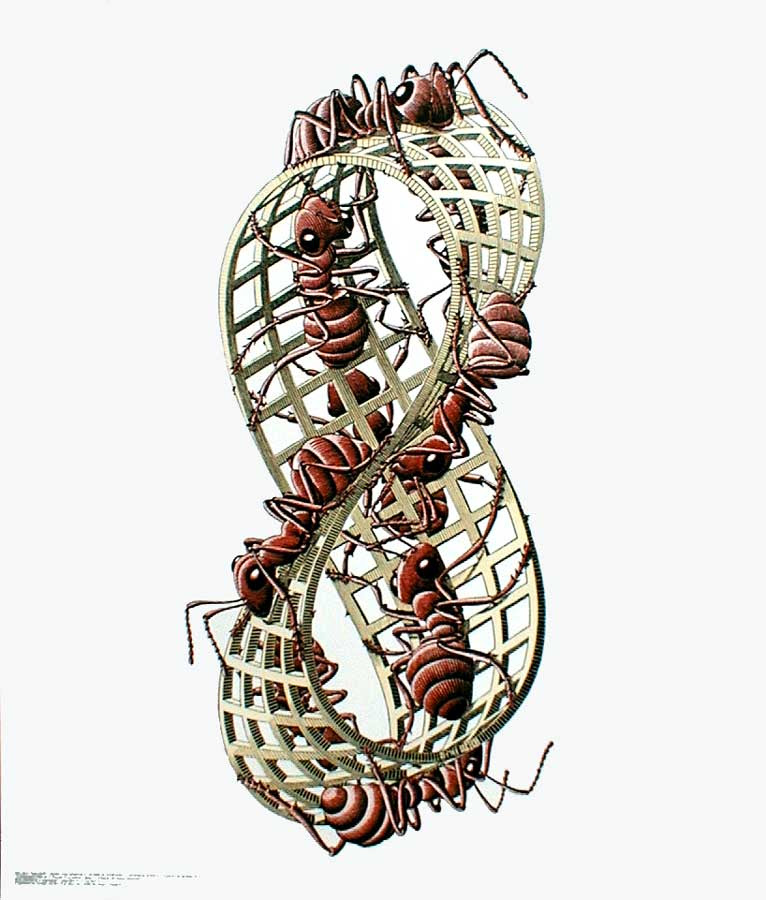 A Möbius strip, from a 1963 poster of the woodcut by M. C. Escher: 'Which side of the strip are the ants walking on?'
M. C. Escher's 'Möbius Strip 11' © The M. C. Escher Company -- Holland
Curiously, Bourke uses the Möbius strip as the perfect metaphor for deconstructing the human vs. animal dilemma. Just as the one-sided surface of the strip has “no inside or outside; no beginning or end; no single point of entry or exit; no hierarchical ladder to clamber up or slide down,” so “the boundaries of the human and the animal turn out to be as entwined and indistinguishable as the inner and outer sides of a Möbius strip.” Bourke points to Derrida’s definition as the most rewarding, calling him “the philosopher of the Möbius strip.”
Ultimately, What It Means to Be Human is less an answer than it is an invitation to a series of questions, questions about who and what we are as a species, as souls, and as nodes in a larger complex ecosystem of sentient beings. As Bourke poetically puts it,

Erasing the awe-inspiring variety of sentient life impoverishes all our lives.

And whether this lens applies to animals or social stereotypes, one thing is certain: At a time when the need to celebrate both our shared humanity and our meaningful differences is all the more painfully evident, the question of what makes us human becomes not one of philosophy alone but also of politics, justice, identity, and every fiber of existence that lies between.
HT my mind on books
By mimi sato - September 01, 2014

Email ThisBlogThis!Share to TwitterShare to FacebookShare to Pinterest
Labels: humanidade