Murdoch's The Australian simultaneously denies that global warming is happening, it's our fault, and it's a problem 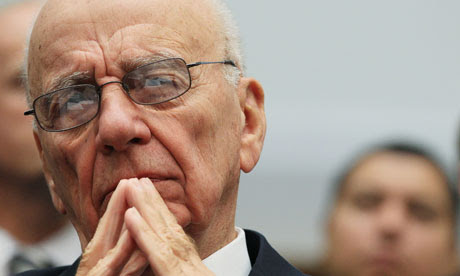 Rupert Murdoch's media outlets will seemingly buy all climate denial arguments at the same time. Photograph: Mark Wilson/Getty Images
I've previously written about the five stages of climate denial. Climate contrarians were exhibiting all five stages leading up to the release of the latest IPCC report in ideologically biased media outlets like Rupert Murdoch's The Australian.
Recently, John Cook (himself an Australian, at the University of Queensland) proposed the Quantum Theory of Climate Denial. 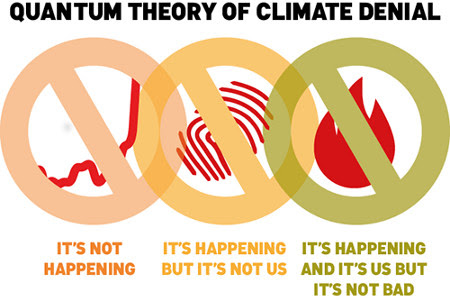 The Quantum Theory of Climate Denial. Created by John Cook
Psychologically this can be easily explained, because climate denial is based not on science, but rather on ideology. This denial is caused by a desire to maintain the status quo and/or an opposition to the policies needed to solve the climate problem. Pseudoscientific arguments are only needed as a means to justify those ideological positions.
If the problem doesn't exist, or if it's not our fault, or if it's nothing to worry about, then we can maintain the status quo. Any of these arguments will suffice to justify opposition to climate solutions, so even though they're contradictory, those who deny climate realities for ideological reasons can deploy any of these positions at any time.
Murdoch's The Australian is a prime example, having in recent months run stories claiming that global warming isn't happening, is happening but isn't due to carbon dioxide emissions, and is happening, is due to carbon dioxide, but isn't anything to worry about. Two of those articles were written by Bjorn Lomborg, a favorite of The Australian. Just a few days ago, the newspaper published another Lomborg piece, this one blaming virtually all of the world's problems on renewable energy. Fossil fuels are lovely – status quo it is!
The editorial was full of misleading, unsubstantiated arguments. In essence, 'renewable energy is too expensive and receives too many subsidies, whereas fossil fuels are great for the poor because they're cheap.' Just look at China, suggests Lomborg – if you can see it through the smog-filled air that's causing 1.2 million premature deaths per year.
The editorial complained about the billions of dollars in wind and solar energy subsidies, neglecting the approximately $1.5 trillion in annual fossil fuel subsidies. It claimed that high energy prices are worse for people in poor countries than global warming impacts. Yet a report from Lomborg's own organization found that climate change has already been hurting the economies of poorer nations for many decades. Those countries happen to be the most vulnerable to climate damages.
The editorial also complained that Australia's carbon tax has caused energy prices to rise, making it difficult for low-income households to pay their energy bills. The solution to that problem is a simple one – make the tax revenue neutral. While energy prices will still rise in that scenario, the costs to households will be offset when the resulting revenue is returned to the taxpayers.
In its state of quantum climate denial, The Australian is happy to swallowLomborg's flawed economics arguments, or take any other position that justifies the status quo.
The quantum theory of climate denial extends far beyond Australia of course. Media outlets, politicians, and others in the US and UK can also often be found to inhabit multiple seemingly contradictory climate positions at the same time. However, given that an ideological opposition to climate solutions seems to be the basis for this denial, it would be nice if we could all move beyond arguing about well-established science and instead debate about climate policies. After all, if we're all honest with ourselves,the climate 'debate' isn't about science at all.
By mimi sato - May 02, 2014